The Black Stallion facts for kids 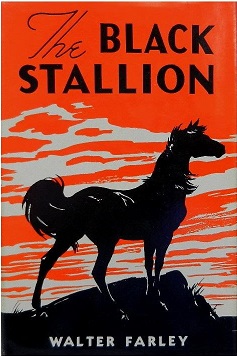 The Black Stallion, known as the Black or Shêtân, is the title character from author Walter Farley's bestselling series about the Arab stallion and his young owner, Alec Ramsay. The series chronicles the story of a sheikh's prized stallion after he comes into Alec's possession, although later books furnish the Black's backstory. Shaytan (under various transliterations) is the Arabic word for "devil".

The first book in the series, published in 1941, is titled The Black Stallion. The subsequent novels are about the stallion's three main offspring: his firstborn colt, Satan; his second colt, Bonfire; and his firstborn filly, Black Minx; as well as about the Black himself. Along with the Black, the series introduces a second stallion that is considered the Black's only equal - The Island Stallion, Flame. This is a separate storyline until Flame and the Black meet in two books - The Black Stallion and Flame, and The Black Stallion Challenged. However, news of Flame's win in an international race in Cuba, and his mysterious disappearance, are mentioned at the end of The Black Stallion Mystery, which serves as the first introduction of this rival for the later books in which they meet.

The Black Stallion was described as "the most famous fictional horse of the century" by the New York Times.

Alexander "Alec" Ramsay - the red-headed young man is the main character in Walter Farley's books. Alec has a passion for horses and has a close bond with his stallion, the Black, that no one can explain or understand, even Alec himself.

Henry Dailey - a retired race-horse trainer and close friend to Alec. A forgotten jockey legend, Henry's career is revived after teaming with Alec to train the Black. Henry later trains many of Hopeful Farm's racehorses.

Charles Volence - Owner of Sun Raider, and accompanies Alec and Henry on their first trip to Arabia.

Tony - an Italian immigrant who owns the carthorse gelding, Napoleon, and works as a vegetable salesman in New York City's smaller streets. Both Tony and Napoleon forge a close bond with the Black and a close friendship remains between Tony, Alec, and Henry throughout the series. Napoleon becomes the Black's constant companion.

Steve Duncan - the young man who discovers the red stallion, Flame on an island and later trains and races him in a match race. He and Alec meet in The Black Stallion Challenged, but his friendship with Alec is complex, due to an obvious competition between the two, and Steve's jealousy towards Alec. Steve is a slightly unhappy, easily annoyed character who Alec strives to befriend but is unable to get past Steve's rather strange personality.

Pitch - Steve's long-time friend, an amateur archaeologist. He is comparable to Henry in several ways, but Alec describes him as looking more tired and less happy.

Abu Ja' Kub ben Ishak - A Sheikh, and Shêtân's (the Black) original owner and breeder. Abu was killed when the Black threw him during a training workout, dying from his injuries.

Tabari - Sheikh Ishak's beautiful daughter, whose friendship with Alec is complicated and ever-changing. Tabari Ishak sent Alec a letter describing how Abu had perished and that her father had willed Shêtân (the Black) to Alec. He is shocked to read, "but for that, we would have destroyed him." She owns her purebred Nejdi horse, Jôhar.

Abd-al-Rahman - Young Sheikh from a kingdom near Abu's.

Ibn al Khaldun - A fat, wrinkled, one-armed man who travels on the same plane as Alec, Henry, and Volence on their first trip to Arabia. Alec is suspicious of him wanting to do away with the Black.

Raj - Brother of Abd-al-Rahman, and friend of Alec Ramsay who lives in Arabia.

Pam Athena - a girl who proved to be an excellent jockey and good worker to Hopeful Farm, and loosened the hardened jockey Alec. She was romantically involved with Alec up until her death in a car accident. Walter Farley based the character on his own daughter and wrote the book that features Pam's death, The Black Stallion Legend, in grief of his daughter's death.

Joe Russo - a boy who helped Alec and the Black.

Ziyadah - Sire of the Black and known as "Firetail". He is a golden chestnut stallion who is in The Black Stallion's Mystery.

The Black Stallion/Shêtân - the black Arabian crossbred stallion who is the main character of the Black Stallion series. He is strong, fast, temperamental, and shares a strong bond with Alec. He was originally bred in Arabia, the property of Abu Ja' Kub ben Ishak, but ultimately was captured or stolen, placed on a ship to a destination unknown, where he first encounters Alec. After the two are shipwrecked and then rescued, he is taken to America by Alec, and becomes a horse to reckon with out on the racetrack.

Napoleon - a mature, gentle gelding belonging to Tony, a vegetable seller. Often fondly called "Nappy", he plays a larger role in the first several books. Napoleon is the Black's stable mate and close pal, but he and Satan were not on good terms in the beginning, due to Satan's original savage nature. Napoleon pulls Tony's vegetable cart through the smaller areas of New York, though he eventually is retired and becomes the Black's full-time companion.

Satan - the Black's first colt, all black with a white diamond on his forehead. He is at first a dangerous, brutal colt, and nearly kills Alec. Henry eventually tames Satan, turning him into a racing legend. Ultimately Satan and Henry develop a close bond.

Black Minx - the Black's first filly is all black and has issues from poor handling and a sensitive temperament. Purchased at an auction by Henry, who has trained many horses but not actually owned one, he overcomes her quirks, even fashioning her a false tail to replace her docked one, lost in an accident, to boost her confidence. Henry trains her as a racehorse and with Alec in the saddle, they go on to win the Kentucky Derby. She is slightly lazy and lacks the drive for racing, and also develops what appears to be an obsession with a rival colt, Wintertime, which ultimately leads to her retirement. Walter Farley felt that the Black's first daughter needed the perfect name, and so he turned to his readers with the prize of a filly if their name for the Black's first daughter was selected in a contest.

Sagr - owned by Abd-al-Rhaman, Sagr is a giant chestnut stallion also from Arabia, with similar features as Shêtân. He is big, strong, and bold. He is a worthy rival to The Black.

Jôhar - a Nejdi purebred Arabian mare owned by Tabari, a gray with a pure white coat. She becomes the dam of The Black's first foal, Satan.

Flame - the chestnut stallion found on Azul Island by Steve Duncan. Flame strongly resembles an Arabian, though much larger - similar to The Black. He equals the Black Stallion in a match race.

Wintertime - a small, quick, blood-bay stallion, a rival to Black Minx. He is retired after an injury on the track, and becomes Black Minx's mate.

Eclipse - a dark brown colt with a white blaze, initially beaten by Black Minx, who soon matures into a powerful contender who takes on older, more experienced horses and becomes almost an equal to the Black's fame and speed.

Casey- an experienced, winning chestnut horse whose speed and skilled jockey tests the Black and Alec in a three-way race that includes Eclipse.

Sun Raider and Cyclone - the first two champion horses that the Black competes against and ultimately beats in a match race billed as "the race of the century."

The Ghost - a beautiful light grey mare, a liberty dressage superstar, featured in The Black Stallion's Ghost. The eerie tale culminates when Alec is obsessed to purchase this mare and breed her to The Black. Her foal with the Black is never seen in the books that are written by Walter Farley, but his son Steven Farley invents the foal as a steeplechaser race horse named Black Storm.

Black Sand - Son of Satan, a promising young colt and favorite of Pam Athena, who must overcome fears linked to abuse by a previous owner.

All content from Kiddle encyclopedia articles (including the article images and facts) can be freely used under Attribution-ShareAlike license, unless stated otherwise. Cite this article:
The Black Stallion Facts for Kids. Kiddle Encyclopedia.