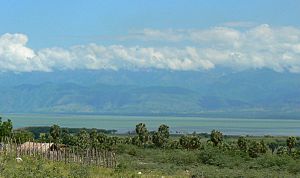 Lake Enriquillo is a lake in western Dominican Republic, near the border with Haiti. Its Taíno name was Hagueygagon but, in colonial times, it had the name Jaragua Lake. It is in the Hoya de Enriquillo valley, a long valley between the "Sierra de Neiba", to the north, and the "Sierra de Bahoruco", to the south.

The lake has an area of 265 km², and its surface is around 44 meters below sea level, the lowest point in the Caribbean. There are three small islands in the lake: Isla Cabritos, Barbarita, and La Islita.

It is a salt water lake with a higher concentration of salt than the sea water because the rivers that flow into the lake are small and the evaporation of its water is high.

Many water birds visit the lake to feed, including flamingos. There are also American crocodiles and some fishes as tilapia. Because it is an arid region, the vegetation around the lake is poor with cacti and small shrubs.

The lake is part of the "Lago Enriquillo e Isla Cabritos National Park" and of the "Jaragua - Bahoruco - Enriquillo Biosphere Reserve".

Cities on the lake

The main cities on the coast (or very near) of the lake are:

All content from Kiddle encyclopedia articles (including the article images and facts) can be freely used under Attribution-ShareAlike license, unless stated otherwise. Cite this article:
Lake Enriquillo Facts for Kids. Kiddle Encyclopedia.