The Miami-Dade Zoological Park and Gardens, also known as Zoo Miami, is a zoological park and garden near Miami and is the largest zoo in Florida. Originally established in 1948 at Crandon Park in Key Biscayne, Zoo Miami relocated in 1980 as Miami MetroZoo to the former location of the Richmond Naval Air Station, southwest of Miami in southern metropolitan Miami-Dade County, in the center of the census-designated places of Three Lakes (north), South Miami Heights (south), Palmetto Estates (east) and Richmond West (west).

The only tropical zoo in the continental United States, Zoo Miami houses over 3,000 animals on nearly 750 acres (304 ha), 324 acres (131 ha) of which are developed. It is about 3 mi (5 km) around if walked on the path, and features over 100 exhibits. The zoo's communications director is wildlife expert and photographer Ron Magill. Zoo Miami is accredited by the Association of Zoos and Aquariums (AZA). 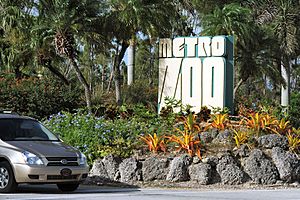 The history of Zoo Miami can be traced back to 1948, when a small road show, stranded near Miami, exchanged three monkeys, a goat and two black bears for approximately $270 in repairs for the truck. These six animals were the beginning of the Crandon Park Zoo at Crandon Park on the island of Key Biscayne, just southeast off the coast from downtown Miami. The Crandon Park Zoo occupied 48 acres (19.4 ha) of the park. The first animals in the zoo, including some lions, an elephant and a rhinoceros, had been stranded when a circus went out of business in Miami. Some Galapagos tortoises, monkeys and pheasants were added from the Matheson plantation. By 1967, the Crandon Park Zoo had grown to over 1,200 animals, and was considered one of the top 25 zoos in the country. Other animals were added, including a white Bengal tiger in 1968.

In 1965, Hurricane Betsy devastated the zoo and killed 250 animals. After the hurricane there was talk of a new zoo for Dade County, but not until 11 December 1970 did Dade County officials apply for 600 acres (243 ha) of land in the Richmond Naval Air Station property. Construction began in 1975. The zoo opened on July 4, 1980 as Miami MetroZoo with a preview section of 12 exhibits and Asia, the first major exhibit, opened on December 12, 1981. A total of 38 exhibits, covering 200 acres (81 ha), were open to the public at this time.

In the 1980s, the zoo continued to expand. An additional 25 acres (10 ha) with six new African hoofed stock exhibits opened in 1982, along with the zoo's monorail in 1984. After the closing of 1984 Louisiana World Exposition in New Orleans, monorails were being moved in Florida and re-used at Miami MetroZoo. Wings of Asia, a 1.6-acre (0.6 ha) free-flight aviary, was opened in December 1984. Three additional African hoofed stock exhibits followed in 1985, and two new exhibits were opened in the African savanna section in 1986. The Australian section of the zoo was opened in 1989, and PAWS, the children's petting zoo, opened in 1989. The Asian Riverlife Experience opened in August 1990.

In 1992, the zoo suffered extensive damage when Hurricane Andrew made landfall in South Florida on August 24. The small, yet intensely powerful category 5 hurricane toppled over 5,000 trees and destroyed the Wings of Asia aviary—which had been built to withstand winds of up to 120 miles per hour (193 km/h)—resulting in the loss of approximately 100 of the 300 resident birds. Despite the majority of the zoo's animals remaining outside during the duration and aftermath of Hurricane Andrew, only five animals were killed from either debris or the consumption of contaminated water. MetroZoo, though looking dramatically different, was reopened on December 18, 1992; with the zoo's tiger temple exhibit renamed in honor of Naomi Browning, a local 12-year-old zoo volunteer who was one of the storm's casualties. By July 1993, many of the animals that were sent to other zoos and animal parks across the United States during the zoo's reconstruction had been returned to MetroZoo, and over 7,000 new trees had been planted to begin restoring the zoo's tree canopy.

In 1994, stray dogs entered the zoo during off-hours and killed five Thomson's gazelles and two Grant's gazelles. In 1996, a brush fire burned 100 acres in the southeast portion of the zoo's undeveloped land. Nearly 30 animals from neighboring exhibits were evacuated. The Falcon Batchelor Komodo Dragon Encounter opened that same year, followed by Andean Condor (1999), Meerkats (2000), Cuban Crocodiles and Squirrel Monkeys (2001), and Dr. Wilde's World, which is an indoor facility for traveling zoological exhibits. The rebuilt Wings of Asia aviary, housing more than 300 individuals representing 70 species of birds, opened in the spring of 2003.

On July 4, 2010, the zoo was renamed the Miami-Dade Zoological Park and Gardens, or Zoo Miami, for marketing and branding purposes. This was a part of the zoo's 30th anniversary celebration. The zoo broke ground on a $43 million project that included an Everglades exhibit and a new state-of-the-art entryway. The Everglades exhibit opened on December 10, 2016.

In 2017, the zoo was struck by Hurricane Irma, which impacted South Florida on September 10. The Amazon and Beyond exhibit suffered the most damage, with widespread tree loss in that area. According to the zoo, one American flamingo, one Great hornbill, and a few other birds died reportedly due to stress. The zoo remained closed until October.

Zoo Miami supports conservation programs at the local, national and global level, and was a founding member of the AZA's Butterfly Conservation Initiative (BFCI), a program designed to assemble non-governmental organizations and government agencies to aid in the population recovery of imperiled butterflies in North America.

There are five main exhibit sections in the zoo: Florida: Mission Everglades, Asia, Africa, Amazon and Beyond, and Australia. The zoo's main entry includes an entryway canopy structure, conjoining ticket booths and gift shop, and an adjacent American flamingo exhibit. At the junction of the zoo's main pathways, is the Conservation Action Center, an indoor pavilion featuring interactive exhibits themed to conservation and wildlife preservation. The property includes a large lake, called Lake Iguana.

An air-conditioned monorail system loops around the zoo's premises, providing both an aerial view of the zoo and a convenient way to move between sections. The monorail system has four stations, each found throughout the zoo. Narrated tram rides and guided tours are given daily. 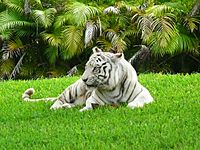 Carlita, a white Bengal tiger, was an iconic showcase of the zoo for nearly two decades.

The zoo's orangutan exhibit once housed Nonja, a female Sumatran orangutan that was relocated from a Dutch zoo to Zoo Miami. She was widely believed to be the oldest living specimen of her species, until her death in 2007. Another notable resident was Carlita, a 21-year-old female white Bengal tiger, who resided in the zoo's tiger enclosure from 1994 until her death in 2013.

The Asian exhibit is home to 3 asian elephants: a elderly bull named Dalip, a elderly female named Nellie and a young male named Ongard. Dalip (born on June 8th, 1966 in Kerela), arrived at the old Crandon Park Zoo on Key Biscayne as a young calf in August of 1967, along with his mate Seetna and he is the father to Spike (born on July 2, 1981 in Zoo Miami and he is Dalip's only surviving offspring) who currently lives in the Smithsonian National Zoo in Washington. Sadly Seetena and Dalip were separated due to the damage caused by Hurricane Andrew in 1992. Both were separated during the storm, Seetna moved to Two Tails Ranch (Patricia Zerbini) and stayed there for breeding purposes but sadly died of labour issues in 1996 while Dalip returned to Zoo Miami in 1995 where he has remained ever since.

The American Banker's Family Aviary, Wings of Asia is also located here. The aviary features 300 rare birds of 70 species in a temperate mixed forest, and it highlights the evolutionary connection of birds to dinosaurs. At 54,000 square feet (5,017 m2), it is the largest open-air Asian aviary in the Western Hemisphere. The Children's Zoo, hosts special animals that can be approached to a close distance by guests. Guests can view meerkats, a petting zoo, an exhibit that displays small species of reptiles, amphibians and insects, butterfly gardens, a carousel dedicated to individual animal species, and experience traditional camel rides.

Eleven-year-old "Pongo," at sixteen feet the tallest giraffe in the zoo, was euthanized on January 4, 2021, after failing to recover from a foot injury.

Amazon and Beyond, situated in the zoo's northwest corner, opened on December 6, 2008. This area has 27 acres (10.9 ha) dedicated to the flora and fauna of South America, and is subdivided into four distinct areas: Village Plaza, Cloud Forest, Amazon Flooded Forest, and Atlantic Forest. The first area provides guests an immersive experience for the unique culture found in central and southern American civilizations. The remaining three areas represent native habitats that are found in the Amazonian region—the "cloud forest", the Amazon River basin, and the Atlantic Forest-Pantanal—with species such as giant river otters, jaguars, Orinoco crocodiles, giant anteaters, howler monkeys, and fruit bats.

The zoo's Australian habitat showcases specimens from throughout the region of Australia, Oceania, and the Pacific islands, including koalas, emus, giant tortoises, and tree-kangaroos. Situated near this to habitat, is the 800-seat Sami Family Amphitheater, where daily animal presentations, concerts and cultural events are held. The amphitheater is named in memory of Albert and Winifred Sami, who anonymously donated an estimated $3 million to the zoo from 1993 until their deaths in 2007 and 2014, respectively. Zoo Miami recently celebrated the birth of a baby koala, who was actually born in May, 2019, but only emerged from its mothers pouch on January 8, 2020. The baby koala was named Hope in light of the recent fires that devastated Australia.

The Zoo Miami Foundation is a group setup as the non-profit support organization of Zoo Miami. It was founded in 1956 and is responsible for improvements over the years of the zoo. Key members of the foundation include Senator Dwight M. Bullard and Diana L. Fitzgerald, among others.

All content from Kiddle encyclopedia articles (including the article images and facts) can be freely used under Attribution-ShareAlike license, unless stated otherwise. Cite this article:
Zoo Miami Facts for Kids. Kiddle Encyclopedia.