The red-vented bulbul (Pycnonotus cafer) is a species of bird. It belongs in the family Pycnonotidae.

The bird is found in tropical southern Asia from India and Sri Lanka east to Burma and southwestern China. It has been introduced to many Pacific islands including Fiji, Samoa, Tonga, and Hawaii. It has also been introduced in parts of Dubai, the United Arab Emirates and New Zealand. It is included among the world's worst introduced species.

The red-vented bulbul is easily identified by its short crest giving the head a squarish appearance. The body is dark brown with a scaly pattern while the head is darker or black. The rump is white while the vent is red. The black tail is tipped in white. The Himalayan races have a more prominent crest and are more streaked on the underside. 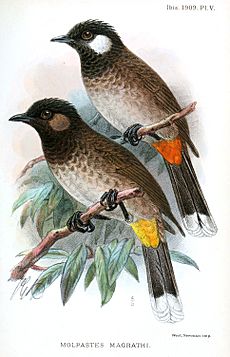 Sexes are similar in plumage, but young birds are duller than adults. The typical call has been transcribed as ginger beer but a number of sharp single note calls likened as pick are also produced. Their alarm calls are usually responded to and heeded by many other species of bird.

Melanistic as well as leucistic individuals have been noted. An individual with aberrant colour form was observed in Bhavans College Campus, Andheri, Mumbai. 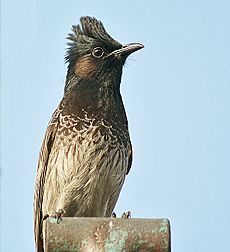 This is a bird of dry scrub, open forest, plains and cultivated lands. In its native range it is rarely found in mature forests. A study based on 54 localities in India concluded that vegetation is the single most important factor that determines the distribution of the species.

It has been introduced into Hawaii and Fiji. They were introduced to Samoa in 1943 and became common on Upolu by 1957. Red-vented bulbuls were introduced to Fiji around 1903 by indentured labourers from India. They established on the Tongan islands of Tongatapu and Niuafo'ou. They were introduced into Melbourne around 1917 but were not seen after 1942. They established in Auckland in the 1950s but were exterminated and another wild population that was detected was exterminated in 2006. In 2013 more were found, and authorities offered a $1000 reward for information that led to a bird's capture. They prefer the dry lowland regions in these introduced regions. They are considered as pests because of their habit of damaging fruit crops. Methiocarb and ziram have been used to protect cultivated Dendrobium orchids in Hawaii from damage by these birds. These birds learn to avoid the repellent chemicals. They can also disperse the seeds of invasive plants like Lantana camara and Miconia calvescens. 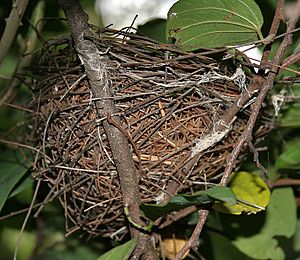 Red-vented bulbuls feed on fruits, petals of flowers, nectar, insects and occasionally geckos. They have also been seen feeding on the leaves of Medicago sativa.

Red-vented bulbuls build their nests in bushes at a height of around 2–3 m (6.6–9.8 ft) two or three eggs is a typical clutch. Nests are occasionally built inside houses or in a hole in a mud bank. In one instance, a nest was found on a floating mat of Water hyacinth leaves and another observer noted a pair nesting inside a regularly used bus. Nests in tree cavities have also been noted.

They breed from June to September. The eggs are pale-pinkish with spots of darker red more dense at the broad end. They are capable of having multiple clutches in a year. Nests are small flat cups made of small twigs but sometimes making use of metal wires. The eggs hatch after about 14 days. Both parents feed the chicks and on feeding trips wait for the young to excrete, swallowing the faecal sacs produced. The pied crested cuckoo is a brood parasite of this species. Fires, heavy rains and predators are the main causes of fledgling mortality in scrub habitats in southern India. 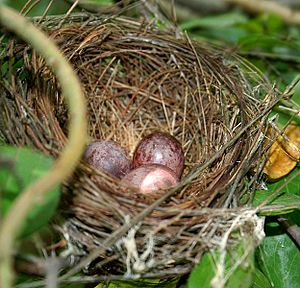 Eggs inside the nest

Their vocalizations are usually stereotyped and they call throughout the year. However, a number of distinct call types have been identified including roosting, begging, greeting, flight and two kinds of alarm calls.

They are important dispersers of seed of plants such as Carissa spinarum.

The red-vented bulbul was among the first animals other than humans that was found to be incapable of synthesizing vitamin C. However a large number of birds were later found to likewise lack the ability to synthesize vitamin C.

Like most birds, these bulbuls are hosts to coccidian blood parasites (Isospora sp.) while some bird lice such as Menacanthus guldum (Ansari 1951 Proc. Natl. Inst. Sci. India 17:40) have been described as ectoparasites.

Along with red-whiskered bulbuls this species has led to changes in the population dynamics of butterfly morphs on the island of Oahu in Hawaii. Here the population of white morphs of the Danaus plexippus butterfly have risen over a period of 20 years due to predation of the orange morphs by these bulbuls.

All content from Kiddle encyclopedia articles (including the article images and facts) can be freely used under Attribution-ShareAlike license, unless stated otherwise. Cite this article:
Red-vented bulbul Facts for Kids. Kiddle Encyclopedia.