The great hornbill (Buceros bicornis) also known as great Indian hornbill or great pied hornbill, is one of the larger members of the hornbill family.

Great hornbills are found in the forests of Nepal, India, the Malay Peninsula and Sumatra, Indonesia. Their impressive size and colour have made them important in many tribal cultures and rituals. The great hornbill is long-lived, living for nearly 50 years in captivity. They are predominantly frugivorous although they are opportunists and will prey on small mammals, reptiles and birds. 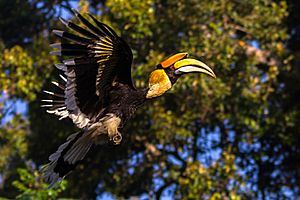 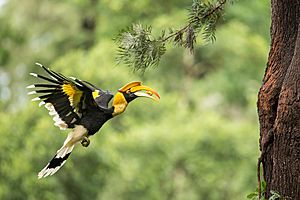 A female great hornbill carries food in her beak to feed the chicks. 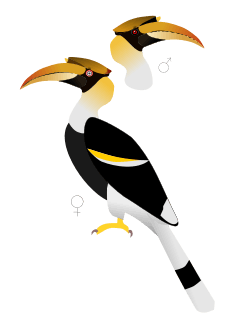 The iris, underside of the casque and orbital skin colours vary between the sexes

The most prominent feature of the hornbill is the bright yellow and black casque on top of its massive bill. The casque appears U-shaped when viewed from the front, and the top is concave, with two ridges along the sides that form points in the front, whence the Latin species epithet bicornis (two-horned). The back of the casque is reddish in females, while the underside of the front and back of the casque is black in males.

The casque is hollow and serves no known purpose, although it is believed to be the result of sexual selection. Male hornbills have been known to indulge in aerial casque butting, with birds striking each other in flight. The male spreads the preen gland secretion, which is yellow, onto the primary feathers and bill to give them the bright yellow colour. The commissure of the beak is black and has a serrated edge which becomes worn with age.

The wing beats are heavy and the sound produced by birds in flight can be heard from a distance. This sound has been likened to the puffing of a steam locomotive starting up. The flight involves stiff flaps followed by glides with the fingers splayed and upcurled. They sometimes fly at great height over forests. 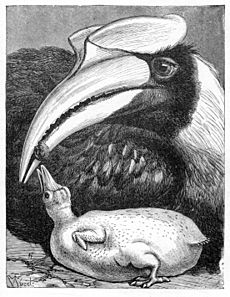 Great hornbills are found in the forests of India, Bhutan, Nepal, Mainland Southeast Asia, Indonesian Island of Sumatra and North eastern region of India. The distribution of the species is fragmented over its range in the Indian subcontinent and Southeast Asia. In the subcontinent they are found in a few forest areas in the Western Ghats and in the forests along the Himalayas. Their distribution extends into Thailand, Burma, Malaya, and Sumatra. A small feral population is found in Singapore. Their habitat is dense old growth (unlogged) forests in hilly regions. They appear to be dependent on large stretches of forest, unlike many of the smaller hornbills. 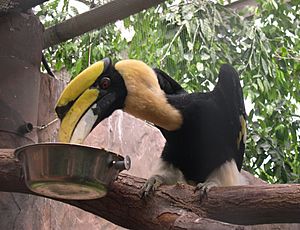 Great hornbills are usually seen in small parties, with larger groups sometimes aggregating at fruit trees. A congregation of 150 to 200 birds has been recorded in southeastern Bhutan. In the wild, the great hornbill's diet consists mainly of fruit. Figs are particularly important as a food source. Vitex altissima has been noted as another important food source. Great hornbills also forage on lipid-rich fruits. They obtain the water that they need entirely from their diet of fruits. They are important dispersers of many forest tree species. They will also eat small mammals, birds, small reptiles and insects. Lion-tailed macaques have been seen to forage alongside these hornbills.

They forage along branches, moving along by hopping, looking for insects, nestling birds and small lizards, tearing up bark and examining them. Prey are caught, tossed in the air and swallowed. A rare squirrel, the Travancore flying squirrel (Petinomys fuscocapillus) has been eaten, and Indian scops owl (Otus bakkamoena), jungle owlet (Glaucidium radiatum) and Sri Lanka green pigeon (Treron pompadora) have been taken as prey in the Western Ghats. 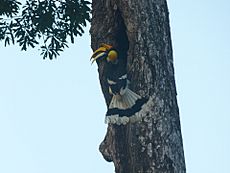 Male feeding the female at the nest

During the breeding season (January to April) great hornbills become very vocal. They make loud duets, beginning with a loud "kok" given about once a second by the male, to which the female joins in. The pair then calls in unison, turning into a rapid mixture of roars and barks. They prefer mature forests for nesting. Large, tall and old trees, particularly emergents that rise above the canopy, seem to be preferred for nesting. They form monogamous pair bonds and live in small groups of 2-40 individuals. Group courtship displays involving up to 20 birds have been observed.

The female hornbill builds a nest in the hollow of a large tree trunk, sealing the opening with a plaster made up mainly of feces. She remains imprisoned there, relying on the male to bring her food, until the chicks are half developed. During this period the female undergoes a complete moult. The young chicks have no feathers and appear very plump. The mother is fed by her mate through a slit in the seal. The clutch consists of one or two eggs, which she incubates for 38–40 days. The female voids feces through the nest slit, as do the chicks from the age of two weeks. Once the female emerges from the nest, the chicks seal it again.

The young birds have no trace of a casque. After the second year the front extremity separates from the culmen, and in the third year it becomes a transverse crescent with the two edges growing outwards and upwards, while the anterior widens to the width of the rear end. Full development takes five years.

Roost sites are used regularly and birds arrive punctually at sunset from long distances, following the same routes each day. Several tall trees in the vicinity may be used, the birds choosing the highest branches with little foliage. They jockey for position until late at dusk. When sleeping they draw their neck back and the bill is held upwards at an angle. 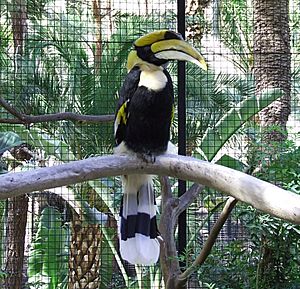 Very few hornbills are held in captivity, and few of them breed well. Females at the nests are extremely easy to capture, and birds caught in the wild are mostly female. Breeding them in captivity has been notoriously difficult, with fewer than a dozen successful attempts. Their extreme selectivity for mates and their long and strong pair bonds make them difficult to maintain for breeding.

In captivity hornbills eat fruits and meat, a healthy diet consisting mostly of fruit and some source of protein. A few have been tamed in captivity but hornbill behavior in captivity is described as highly strung. Captive specimens may bask in the sun with outstretched wings.

Tribal peoples threaten the great Indian hornbill by hunting it for its various parts. The beaks and head are used in charms and the flesh is believed to be medicinal. Young birds are considered a delicacy. Tribesmen in parts of northeastern India and Borneo use the feathers for head-dresses, and the skulls are often worn as decorations. The Sema Nagas consider the flesh unfit for eating, believing that it produces sores on their feet, as in the bird. When dancing with the feathers of the hornbill, they avoid eating vegetables, as doing so is also believed to produce the same sores on the feet. Among the Zomi, a festival without a hornbill feather is incomplete. Conservation programmes have attempted to provide tribes with feathers from captive hornbills and ceramic casques to substitute for natural ones.

The great hornbill is called homrai in Nepal (hence the name of the Himalayan subspecies) and banrao, both meaning "king of the forest". It is called "Vezhaambal" in Malayalam.

Flag of Chin State in Myanmar.

Use as a symbol

Photo of "William", who lived at the premises of the Bombay Natural History Society and was the inspiration for the logo of the Society.

The great hornbill is the state bird of Chin State in Myanmar, and of Kerala and Arunachal in India.

The Great Hornbill is used as the logo of Kerala Evergreen FC an Indian professional football club based in Thiruvananthapuram, Kerala, India, that competes in the I-League.

A great hornbill called William (pictured) was the model for the logo of the Bombay Natural History Society (BNHS) and the name of their building.

All content from Kiddle encyclopedia articles (including the article images and facts) can be freely used under Attribution-ShareAlike license, unless stated otherwise. Cite this article:
Great hornbill Facts for Kids. Kiddle Encyclopedia.