Yulee is a Census county division (CCD) in Nassau County, Florida, United States. The population is currently 28,798 as of April 2018. Yulee is part of the Jacksonville metropolitan area, which was home to 1,504,980 people in 2017. Today, the Yulee CCD is a residential bedroom community for those who commute to Jacksonville, Naval Submarine Base Kings Bay, or other locations in Southeast Georgia, but is working to diversify its tax base.

A post office called Yulee has been in operation since 1893. The community was named for David Levy Yulee, a United States Senator from Florida. 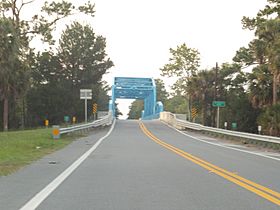 There are more than 10 neighborhoods within Yulee's area.

Yulee is covered by area code: 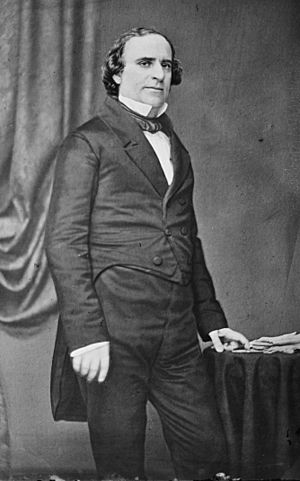 According to the Fernandina Observer it stated that the entire Yulee Census County Division had a total population of 28,798 as of April 22, 2018.

Like much of the south Atlantic region of the United States, Yulee has a humid subtropical climate (Köppen Cfa), with mild weather during winters and hot and humid weather during summers. Seasonal rainfall is concentrated in the warmest months from May through September, while the driest months are from November through April. Due to Yulee's low latitude and proximity to the coast it allows for very little cold weather, and winters are typically mild and sunny. 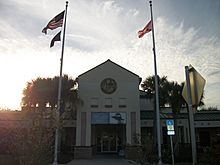 The Florida Welcome Center in Yulee, off Interstate 95.

Yulee has a number of outdoor festivals and events, the most prominent of which is the annual Holiday Festival and Parade. Yulee has numerous restaurants, cafes, and several bars. By night, Yulee offers nightlife frequented by locals, young professionals, students from the nearby college, and tourists. Yulee has a sports complex and gymnasium.

Yulee is the headquarters for the Nassau County Economic Development Board, which represents all of Nassau County as a desirable place to relocate a business or to expand an existing business. The Nassau County Sheriff's Office is also headquartered in Yulee. In November 2017 it was announced that the University of Florida will be building two health and fitness facilities. In January 2018 the large energy company Florida Public Utilities announced that they will be relocating to Yulee and will be building a new 55,000 square foot corporate headquarters.

The Florida Welcome Center located in northern Yulee is a "tourist information house", located near the Florida/Georgia state line on I-95. This center provides incoming visitors with a variety of information on travel, highways, sports, climate, accommodations, cities, outdoor recreation, and attractions. In tribute to the citrus industry (which historically has been a major part of Florida's economy), every visitor is offered a free cup of Florida citrus juice (orange or grapefruit).

In March 2016, Rayonier announced that they would be building a new corporate headquarters within the Yulee CCD. Rayonier also plans to develop a 24,000 acre pine forest in Yulee into a community complete with housing, offices, medical facilities, shopping centers, light industrial facilities and schools. The development, starting with 4,200 acres and is called Wildlight. Rayonier is also working with Nassau County to develop the Wildlight Elementary School at a cost of $26 million which is scheduled to open for the start of the 2017–2018 academic year with 600 students. 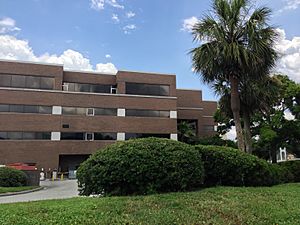 Florida State College at Jacksonville (FSCJ), a state college in the Florida College System, has a campus named the Nassau Center located within the Yulee CCD. The college is accredited by the Southern Association of Colleges and Schools. The Nassau Center offers courses, certificates, and degree programs in various fields and includes an Outdoor Education Center, which is a 16-acre natural space owned by FSCJ. 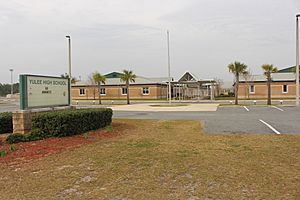 Yulee provides adult education in a variety of subjects at the FSCJ Nassau Center and at the Yulee Public Library.

The Nassau County Public Library System has a Yulee Branch Library located within the Florida State College of Jacksonville Nassau Campus in Yulee.

All content from Kiddle encyclopedia articles (including the article images and facts) can be freely used under Attribution-ShareAlike license, unless stated otherwise. Cite this article:
Yulee, Florida Facts for Kids. Kiddle Encyclopedia.