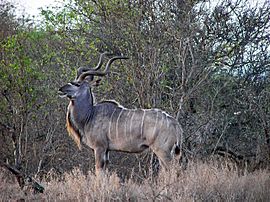 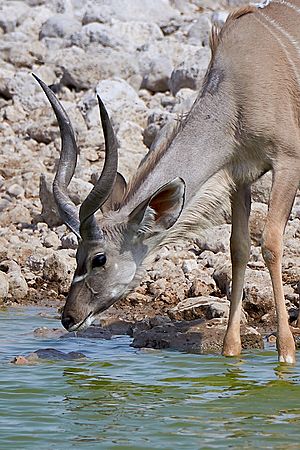 They are a brown-grey color with white stripes that go down the center of their body. They are very fast and stealthy. For these facts their other African name is Grey Ghost. The males have tall spiraling horns. The females regularly have no horns. Greater Kudus are more slender than lesser Kudus. Baby Kudus usually are a lighter brown than adult Kudus. 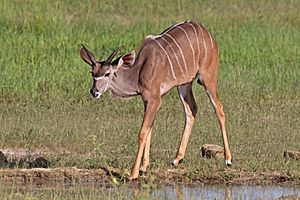 Male Kudus live widespread from the group, or in bachelor groups. The males do not normally have long fights over dominance. They normally prepare to fight but one stands up more lateral, making himself look larger and more of a threat. Males are only seen with females during mating season, in groups of 6-10 with their offspring. The calves grow very quickly and are usually ready to leave their mother at around six months.

Mother Kudus usually leave the group when they are ready to give birth. They will leave the newborn out for 4–5 weeks. Then the calf will start meeting its mother for short periods in times. At 3–4 months it will be with its mother constantly. At six months the calf will be old enough and join the group as an adult.

They do not eat meat, they eat plant shoots, and in dry season they eat fruit like wild watermelon for the liquid and natural sugars. The lesser kudu is less dependent on water sources than the greater kudu.

All content from Kiddle encyclopedia articles (including the article images and facts) can be freely used under Attribution-ShareAlike license, unless stated otherwise. Cite this article:
Kudu Facts for Kids. Kiddle Encyclopedia.