Guy the Gorilla facts for kids 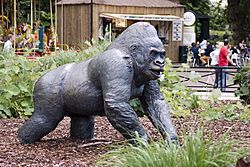 Statue of Guy in London Zoo

Guy the Gorilla (1946–1978) was a western lowland gorilla (Gorilla gorilla gorilla) who was London Zoo's most famous resident and often profiled on children's TV shows and natural history productions. The exact day of Guy's birth was unknown, but the official birthday was set by the Zoo as May 30, and he received large numbers of cards each year.

Guy arrived at the zoo on 5 November 1947, Guy Fawkes Night, hence his name. A baby, holding a small tin hot-water bottle, he weighed just 23 lb (10 kg). Guy was the replacement for the zoo's previous gorilla, Meng, who had died in 1941. Guy was captured in the French Cameroons on behalf of Paris Zoo and was traded for a tiger from Calcutta Zoo. It was arranged that London Zoo would receive Guy. The Paris Zoo Director sent instructions to their game department in West Africa to find a suitable female to mate with him.

London sent a request to animal dealers and zoos worldwide to find a mate, and in 1969 the zoo was offered Lomie, a five-year-old female who had been living in nearby Chessington Zoo. She then lived for a year in the old Monkey House in London Zoo before being introduced to Guy. When the new Ape and Monkey House, the Michael Sobell Pavilion, was opened in 1971, Guy and Lomie were finally introduced. However, after 25 years of isolation, it was too late; they never produced any offspring.

His appearance was fearsome, yet his nature was very gentle; when small birds flew into his cage, he was often seen to lift them on his hands and examine them softly. This gentleness is said to have been a major part of his great popularity.

Guy died aged 31 or 32, in 1978 of a heart attack during an operation on his infected teeth. His tooth decay had been caused by the fact that visitors were allowed to feed him sweets.

During pre-production for the film 2001: A Space Odyssey (1968), Dan Richter — who played the lead ape-man ("Moonwatcher") in the film — studied Guy intently and modelled his acting and mime performance partly on Guy's behaviour.

English musician David Dundas released his album Vertical Hold in 1978, which obtained a song devoted to "Guy The Gorilla". https://www.youtube.com/watch?v=G6mTHifPd8o

All content from Kiddle encyclopedia articles (including the article images and facts) can be freely used under Attribution-ShareAlike license, unless stated otherwise. Cite this article:
Guy the Gorilla Facts for Kids. Kiddle Encyclopedia.