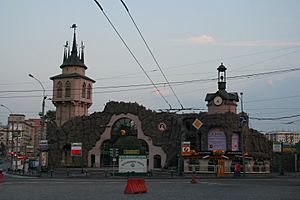 The Moscow Zoo is a zoo in Moscow. It is one of the ten largest zoos in the world. It covers 53 acres (21 ha) (in 2013). The zoo holds over 6,000 individual animals, of 927 species (in 2013). The zoo opened in 1864. The most recent exhibits include a sea aquarium, an aviary, a sea lion exhibit, and children's attractions. A footbridge connects the two parts of the zoo that are separated by Bolshaya Gruzinskaya Street.

All content from Kiddle encyclopedia articles (including the article images and facts) can be freely used under Attribution-ShareAlike license, unless stated otherwise. Cite this article:
Moscow Zoo Facts for Kids. Kiddle Encyclopedia.