The Arabian oryx or white oryx (Oryx leucoryx) is a medium-sized antelope with a distinct shoulder bump, long, straight horns, and a tufted tail. It is a bovid, and the smallest member of the genus Oryx, native to desert and steppe areas of the Arabian Peninsula. The Arabian oryx was extinct in the wild by the early 1970s, but was saved in zoos and private reserves, and was reintroduced into the wild starting in 1980.

In 1986, the Arabian oryx was classified as endangered on the IUCN Red List, and in 2011, it was the first animal to revert to vulnerable status after previously being listed as extinct in the wild. It is listed in CITES Appendix I. In 2016, populations were estimated at 1,220 individuals in the wild, including 850 mature individuals, and 6,000–7,000 in captivity worldwide.

A Qatari oryx named "Orry" was chosen as the official games mascot for the 2006 Asian Games in Doha, and is shown on tailfins of planes belonging to Middle Eastern airline Qatar Airways. It is the national animal of Oman.

The taxonomic name Oryx leucoryx is from the Greek orux (gazelle or antelope) and leukos (white). The Arabian oryx is also called the white oryx in English, dishon in Hebrew, and is known as maha, wudhaihi, baqar al-wahsh, and boosolah in Arabic.

Prussian zoologist Peter Simon Pallas introduced "oryx" into scientific literature in 1767, applying the name to the common eland as Antilope oryx (Pallas, 1767). In 1777, he transferred the name to the Cape gemsbok. At the same time, he also described what is now called the Arabian oryx as Oryx leucoryx, giving its range as "Arabia, and perhaps Libya". In 1816, Henri Marie Ducrotay de Blainville subdivided the antelope group, adopted Oryx as a genus name, and changed the Antilope oryx of Pallas to Oryx gazella (de Blainville, 1818). In 1826, Martin Lichtenstein confused matters by transferring the name Oryx leucoryx to the scimitar oryx (now Oryx dammah) which was found in the Sudan by the German naturalists Wilhelm Friedrich Hemprich and Christian Gottfried Ehrenberg (Lichtenstein, 1826). The Arabian oryx was then nameless until the first living specimens in Europe were donated to the Zoological Society of London in 1857. Not realizing this might be the Oryx leucoryx of previous authors, Dr. John Edward Gray proposed calling it Oryx beatrix after HRH the Princess Beatrice of the United Kingdom (Gray, 1857). Though this name was to persist for many years, Oldfield Thomas renamed the scimitar oryx as Oryx algazal in 1903 (it has since been renamed Oryx dammah), and gave the Arabian oryx back its original name. The confusion between the two species has been exacerbated because both have been called the white oryx in English. 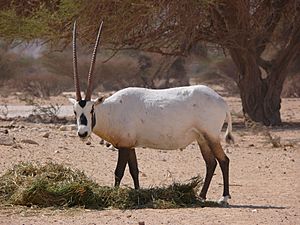 An Arabian oryx stands about 1 m (39 in) high at the shoulder and weighs around 70 kg (150 lb). Its coat is an almost luminous white, the undersides and legs are brown, and black stripes occur where the head meet the neck, on the forehead, on the nose, and going from the horn down across the eye to the mouth. Both sexes have long, straight or slightly curved, ringed horns which are 50 to 75 cm (20 to 30 in) long.

Arabian oryxes rest during the heat of the day. They can detect rainfall and move towards it, meaning they have huge ranges; a herd in Oman can range over 3,000 km2 (1,200 sq mi). Herds are of mixed sex and usually contain between two and 15 animals, though herds up to 100 have been reported. Arabian oryxes are generally not aggressive toward one another, which allows herds to exist peacefully for some time.

Other than humans, wolves are the Arabian oryx's only predator. In captivity and safe conditions in the wild, Arabian oryxes have a lifespan of up to 20 years. In periods of drought, though, their life expectancy may be significantly reduced by malnutrition and dehydration. Other causes of death include fights between males, snakebites, disease, and drowning during floods.

Historically, the Arabian oryx probably ranged throughout most of the Middle East. In the early 1800s, they could still be found in the Sinai, Palestine, the Transjordan, much of Iraq, and most of the Arabian Peninsula. During the 19th and early 20th centuries, their range was pushed back towards Saudi Arabia, and by 1914, only a few survived outside that country. A few were reported in Jordan into the 1930s, but by the mid-1930s, the only remaining populations were in the Nafud Desert in northwestern Saudi Arabia and the Rub' al Khali in the south.

In the 1930s, Arabian princes and oil company clerks started hunting Arabian oryxes with automobiles and rifles. Hunts grew in size, and some were reported to employ as many as 300 vehicles. By the middle of the 20th century, the northern population was effectively extinct. The last Arabian oryx in the wild prior to reintroduction were reported in 1972.

Arabian oryxes prefer to range in gravel desert or hard sand, where their speed and endurance will protect them from most predators, as well as most hunters on foot. In the sand deserts in Saudi Arabia, they used to be found in the hard sand areas of the flats between the softer dunes and ridges.

Arabian oryxes have been reintroduced to Oman, Saudi Arabia, Israel, the United Arab Emirates, Syria, and Jordan. A small population was introduced on Hawar Island, Bahrain, and large semi-managed populations at several sites in Qatar and the UAE. The total reintroduced population is now estimated to be around 1,000. This puts the Arabian oryx well over the threshold of 250 mature individuals needed to qualify for endangered status.

The diets of the Arabian oryx consist mainly of grasses, but they eat a large variety of vegetation, include buds, herbs, fruit, tubers and roots. Herds of Arabian oryxes follow infrequent rains to eat the new plants that grow afterward. They can go several weeks without water. Research in Oman has found grasses of the genus Stipagrostis are primarily taken; flowers from Stipagrostis plants appeared highest in crude protein and water, while leaves seemed a better food source with other vegetation.

When the Arabian oryx is not wandering its habitat or eating, it digs shallow depressions in soft ground under shrubs or trees for resting. They are able to detect rainfall from a distance and follow in the direction of fresh plant growth. The number of individuals in a herd can vary greatly (up to 100 have been reported occasionally), but the average is 10 or fewer individuals. Bachelor herds do not occur, and single territorial males are rare. Herds establish a straightforward hierarchy that involves all females and males above the age of about seven months. Arabian oryxes tend to maintain visual contact with other herd members, with subordinate males taking positions between the main body of the herd and the outlying females. If separated, males will search areas where the herd last visited, settling into a solitary existence until the herd's return. Where water and grazing conditions permit, male Arabian oryxes establish territories. Bachelor males are solitary. A dominance hierarchy is created within the herd by posturing displays, which avoid the danger of serious injury their long, sharp horns could potentially inflict. Males and females use their horns to defend the sparse territorial resources against interlopers. 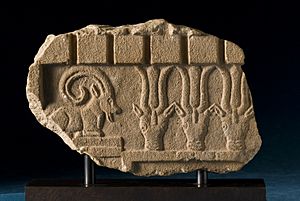 South Arabian fragment of a stela, depicts a reclining ibex and three Arabian oryx heads. The ibex was one of the most sacred animals in South Arabia, while the oryx antelope was associated with the god Attar, 5th century BC.

The Arabian oryx is the national animal of Jordan, Oman, the United Arab Emirates, Bahrain, and Qatar.

The Arabian oryx is also the namesake of several businesses on the Arabian peninsula, notably Al Maha Airways and Al Maha Petroleum.

In the King James Version of the Bible, the word re’em is translated as 'unicorn'. In Modern Hebrew, the name re'em laban, meaning white oryx, is used in error for the Arabian oryxes living in the sanctuary Yotvata Hai Bar near Eilat. The scimitar oryx is called re'em Sahara. The Arabian name ri'ïm is the equivalent of the Hebrew name re'em, also meaning white oryx, suggesting a borrowing in the Early Modern Era.

The myth of the one-horned unicorn may be based on oryxes that have lost one horn. Aristotle and Pliny the Elder held that the oryx was the unicorn's "prototype". From certain angles, the oryx may seem to have one horn rather than two, and given that its horns are made from hollow bone that cannot be regrown, if an Arabian oryx were to lose one of its horns, for the rest of its life, it would have only one.

Another source for the concept may have originated from the translation of the Hebrew word re'em into Greek as μονόκερως, monokeros, in the Septuagint. In Psalm 22:21, the word karen, meaning horn, is written in singular. The Roman Catholic Vulgata and the Douay-Rheims Bible translated re'em as rhinoceros; other translations are names for a wild bull, wild oxen, buffalo, or gaur, but in some languages a word for unicorn is maintained. The Arabic translation alrim is the most correct choice etymologically, meaning 'white oryx'. 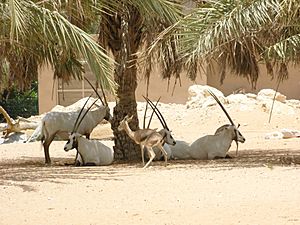 In Al Ain Zoo in the Eastern Region of the Emirate of Abu Dhabi, the UAE

The Phoenix Zoo and the Fauna and Flora Preservation Society of London (now Fauna and Flora International), with financial help from the World Wildlife Fund, are credited with saving the Arabian oryx from extinction. In 1962, these groups started the first captive-breeding herd in any zoo, at the Phoenix Zoo, sometimes referred to as "Operation Oryx". Starting with nine animals, the Phoenix Zoo has had over 240 successful births. From Phoenix, Arabian oryxes were sent to other zoos and parks to start new herds.

In 1968, Sheikh Zayed bin Sultan Al Nahyan of the UAE, out of concern for the land's wildlife, particularly ungulates such as the Arabian oryx, founded the Al Ain Zoo to conserve them.

Arabian oryxes were hunted to extinction in the wild by 1972. By 1980, the number of Arabian oryxes in captivity had increased to the point that reintroduction to the wild was started. The first release, to Oman, was attempted with Arabian oryxes from the San Diego Wild Animal Park. Although numbers in Oman have declined, there are now wild populations in Saudi Arabia and Israel, as well. One of the largest populations is found in Mahazat as-Sayd Protected Area, a large, fenced reserve in Saudi Arabia, covering more than 2,000 km2.

In June 2011, the Arabian oryx was relisted as vulnerable by the IUCN Red List. The IUCN estimated there were more than 1,200 Arabian oryx in the wild as of 4 December  2020 (2020 -12-04)[update] 2016, with 6,000–7,000 held in captivity worldwide in zoos, preserves, and private collections. Some of these are in large, fenced enclosures (free-roaming), including those in Syria (Al Talila), Bahrain, Qatar, and the UAE. This is the first time the IUCN has reclassified a species as vulnerable after it had been listed as extinct in the wild. The Arabian oryx is also listed in CITES Appendix I.

On June 28, 2007, Oman's Arabian Oryx Sanctuary was the first site ever to be removed from the UNESCO World Heritage List. UNESCO's reason for this was the Omani government's decision to open 90% of the site to oil prospecting. The Arabian oryx population on the site has been reduced from 450 in 1996 to only 65 in 2007. Now, fewer than four breeding pairs are left on the site.

All content from Kiddle encyclopedia articles (including the article images and facts) can be freely used under Attribution-ShareAlike license, unless stated otherwise. Cite this article:
Arabian oryx Facts for Kids. Kiddle Encyclopedia.