The Arabian wolf (Canis lupus arabs) is a subspecies of gray wolf which lives on the Arabian peninsula. It is the smallest wolf subspecies, and a desert-adapted subspecies that normally lives in small groups. It is omnivorous, eating carrion and garbage, as well as small to medium-sized prey.

Once thought to possibly be C. l. pallipes (the Indian wolf), the Arabian wolf was designated Canis lupus arabs by the British zoologist Reginald Innes Pocock in 1934. Pocock noted its smaller skull and smaller size.

Admixture with other Canis species

In 2018, whole genome sequencing was used to compare members of the genus Canis. The study found evidence of gene flow between African golden wolves, golden jackals, and grey wolves (from Saudi Arabia and Syria). One African golden wolf from the Egyptian Sinai Peninsula showed high admixture with the Middle Eastern grey wolves and dogs, highlighting the role of the land bridge between the African and Eurasian continents in canid evolution. The African golden wolf was found to be the descendant of a genetically admixed canid of 72% grey wolf and 28% Ethiopian wolf ancestry. 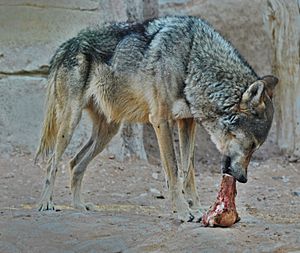 Along with the Indian wolf, it is probably smaller than other wolves to help it adapt to life in a hot, dry climate. This is an example of Bergmann's rule, where mammal size varies by the warmth of their environment.

Its ears are proportionally larger in relation to its body size, an adaptation probably developed to help disperse body heat.

Arabian wolves do not usually live in large packs, and instead hunt in pairs or in groups of about three or four animals.

They have a short thin coat which is usually a grayish beige color. Similar to other canines, the Arabian wolf does not have sweat glands and so it must control its body temperature by rapid panting, which causes evaporation from the lungs.

Occasionally the pads of the third and fourth toes are fused in the back; a feature which differentiates its tracks from a dog's.

It is distinguished from the Indian wolf by its smaller skull, smaller size and thinner coat.

The Arabian wolf has a lifespan of about 6 years. 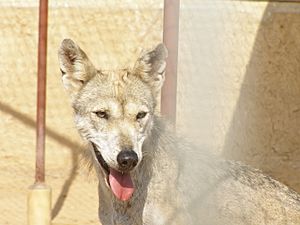 Arabian wolves are mainly carnivorous, but also omnivorous and in some areas largely dependent on human garbage and excess products. They also feed on hares, rodents, small ungulates, cats, sweet fruits, roadkill and other carrion. Opportunistically almost any small animal including fish, snails, baby baboons can be part of their diet. Because Arabian wolves can attack and eat any domestic animals up to the size of a goat, Bedouins and farmers will not hesitate to shoot, poison, or trap them.

The Arabian wolf was once found throughout the Arabian Peninsula, but now lives only in small pockets in southern Israel, southern and western Iraq, Oman, Yemen, Jordan, Saudi Arabia, and some parts of the Sinai Peninsula in Egypt.

It is rare throughout most of its range because of human persecution. In Oman, wolf populations have increased because of a ban on hunting, and they may naturally re-establish themselves in certain places within the region in the relatively near term.

In Israel, between 100 and 150 Arabian wolves are found across the Negev and the Arava. The United Arab Emirates and Egypt both have a captive breeding program, and the wolf is protected in Oman and Israel, but elsewhere, its future is uncertain. In Saudi Arabia, the wolf is protected in places and still exists in places with sparse human activity.

All content from Kiddle encyclopedia articles (including the article images and facts) can be freely used under Attribution-ShareAlike license, unless stated otherwise. Cite this article:
Arabian wolf Facts for Kids. Kiddle Encyclopedia.