The aye-aye (Daubentonia madagascariensis) is a lemur which lives in rain forests of Madagascar, a large island off the southeast coast of Africa.

This solitary animal is nocturnal (most active at night). The aye-aye spends most of its time in trees. During the day, it sleeps in a nest in the fork of a tree. It builds the nest out of leaves and twigs.

The aye-aye has rodent-like teeth and a special thin middle finger to get at the insect grubs under tree bark. It fills the same ecological niche as woodpeckers do elsewhere. It taps on trees to find grubs, then gnaws holes in the wood using its forward slanting incisors. Then it sticks in its middle finger to pull the grubs out.

Lemurs are primates, and so are related to monkeys, apes, and people. 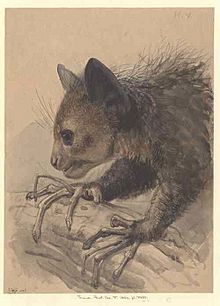 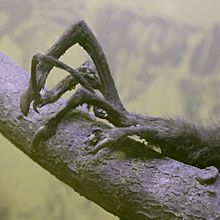 The aye-aye is a nocturnal and arboreal animal meaning that it spends most of its life high in the trees. Although they are known to come down to the ground on occasion, aye-ayes sleep, eat, travel and mate in the trees and are most commonly found close to the canopy where there is plenty of cover from the dense foliage. During the day, aye-ayes sleep in spherical nests in the forks of tree branches that are constructed out of leaves, branches and vines before emerging after dark to begin their hunt for food. Aye-aye are solitary animals that mark their large home range with scent. The smaller territories of females often overlap those of at least a couple of males. Male aye-ayes tend to share their territories with other males and are even known to share the same nests (although not at the same time), and can seemingly tolerate each other until they hear the call of a female that is looking for a mate.

The aye-aye commonly eats seeds, fruits, nectar and fungi, but also insect larvae classifying it as an omnivore. Aye-ayes tap on the trunks and branches of trees at a rate of up to eight times per second, and listen to the echo produced to find hollow chambers. Studies have suggested that the acoustic properties associated with the foraging cavity have no effect on excavation behavior. Once a chamber is found, they chew a hole into the wood and get grubs out of that hole with their highly adapted narrow and bony middle fingers. The aye-aye begins foraging between 30 minutes before and three hours after sunset. Up to 80% of the night is spent foraging in the canopy, separated by occasional rest periods. It climbs trees by making successive vertical leaps, much like a squirrel. Horizontal movement is more difficult, but the aye-aye rarely descends to jump to another tree, and can often travel up to 4 km (2.5 mi) a night.

Though foraging is usually solitary, they occasionally forage in groups. Individual movements within the group are coordinated using both vocalisations and scent signals.

The aye-aye is classically considered 'solitary' as they have not been observed to groom each other. However, recent research suggests it is more social than once thought. It usually sticks to foraging in its own personal home range, or territory. The home ranges of males often overlap, and the males can be very social with each other. Female home ranges never overlap, though a male's home range often overlaps that of several females. The male aye-ayes live in large areas up to 80 acres (320,000 m2), while females have smaller living spaces that goes up to 20 acres (81,000 m2). It is difficult for the males to defend a singular female because of the large home range. They are seen exhibiting polygyny because of this. Regular scent marking with their cheeks and neck is how aye-ayes let others know of their presence and repel intruders from their territory.

Like many other prosimians, the female aye-aye is dominant to the male. They are not typically monogamous, and will often challenge each other for mates. Male aye-ayes are very assertive in this way, and sometimes even pull other males away from a female during mating. The aye-aye is thought to be the only primate which uses echolocation to find its prey. 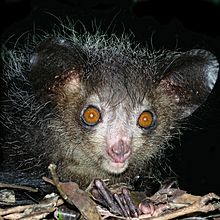 The aye-aye lives primarily on the east coast of Madagascar. Its natural habitat is rainforest or deciduous forest, but many live in cultivated areas due to deforestation. Rainforest aye-ayes, the most common, dwell in canopy areas, and are usually sighted above 700 meters altitude. They sleep during the day in nests built in the forks of trees.

All content from Kiddle encyclopedia articles (including the article images and facts) can be freely used under Attribution-ShareAlike license, unless stated otherwise. Cite this article:
Aye-aye Facts for Kids. Kiddle Encyclopedia.