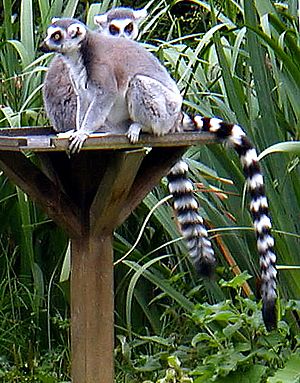 The Duke Lemur Center is an 85-acre (34 ha) sanctuary for several species of lemurs and lorises. It is at Duke University in Durham, North Carolina. The center is the largest sanctuary for these animals in the world. There are about 10 different species at the center. The center does not harm the animals while researching them. The Duke Lemur Center is open to the public. Tours are by appointment only.

On November 10, 2014, Jovian (best known for mainly portraying Zoboomafoo in the series of the same name) died at his home in the center of renal failure at age 20. It is currently unknown when his funeral was.

All content from Kiddle encyclopedia articles (including the article images and facts) can be freely used under Attribution-ShareAlike license, unless stated otherwise. Cite this article:
Duke Lemur Center Facts for Kids. Kiddle Encyclopedia.