A sifaka is a lemur of the genus Propithecus from the family Indriidae within the order Primates. The name of their family is an onomatopoeia of their characteristic "shi-fak" alarm call. Like all lemurs, they are found only on the island of Madagascar. All species of sifakas are threatened, ranging from vulnerable to critically endangered.

Sifakas are medium-sized indrids with a head and body length of 40 to 55 cm (16 to 22 in) and a weight of 3 to 6 kg (6.6 to 13.2 lb). Their tail is just as long as their body, which differentiates them from the Indri. Their fur is long and silky, with coloration varying by species from yellowish-white to blackish-brown. Their round, hairless face is always black. As with all lemurs, the sifaka has special adaptations for grooming, including a toilet-claw on its second toe and a toothcomb.

Sifakas move by vertical clinging and leaping, meaning they maintain an upright position leaping from tree trunk to tree trunk and moving along branches. They are skillful climbers and powerful jumpers, able to make leaps up to 10 m (32.8 ft) from one tree to the next. On the ground, they move like all indrids, with bipedal, sideways hopping movements of the hind legs, holding their fore limbs up for balance. Sifakas are diurnal and arboreal.

Sifakas are herbivores, eating leaves, flowers, and fruits. When not searching for food, they spend a good part of the day sunbathing, stretched on the branches. Sifakas live in larger groups than the other indrids (up to 13 animals). They have a firm territory, which they mark with scent glands. Edges of different sifaka territories can overlap. Though they defend their territory from invasion by others of their species, they may peacefully co-exist with other lemur species such as the red-bellied lemur and the common brown lemur. Successful invasions are known to result in death of male members, group takeover, and infanticide. 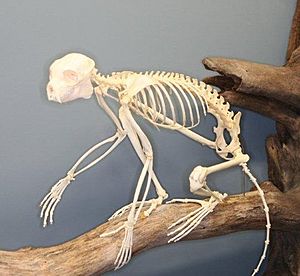 Predators of the sifaka include the fossa, a puma-like mammal native to Madagascar, and aerial hunters such as hawks. The sifaka usually avoids these attacks with its agile acrobatics through the trees high above the ground. However, they have been known to attack by biting and scratching and have even been witnessed fighting off a Madagascar ground boa.

A four- to five-month gestation period ends with the birth of a single offspring in July. The young holds fast to the mother's belly when small, but then later is carried on her back. Young are weaned after about six months and reach full maturity at the age of two to three years. The life expectancy of the sifakas is up to 20 years.

Sifakas hop side-to-side when moving on the ground. 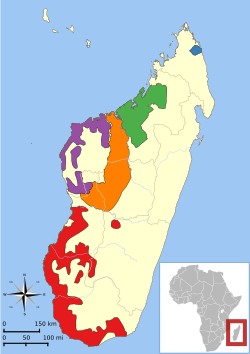 Range of the verreauxi group: 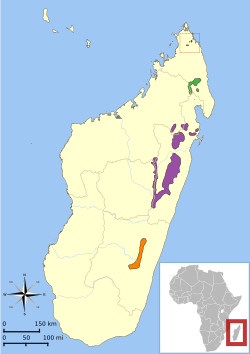 Range of the diadema group:

All content from Kiddle encyclopedia articles (including the article images and facts) can be freely used under Attribution-ShareAlike license, unless stated otherwise. Cite this article:
Sifaka Facts for Kids. Kiddle Encyclopedia.