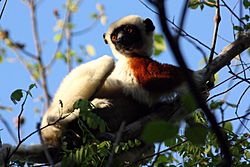 Jovian (1994 – November 10, 2014) was a Coquerel's sifaka lemur, best known for mainly portraying Zoboomafoo in the series of the same name. On November 10, 2014, Jovian died at his home in the Duke Lemur Center of renal failure at age 20.

Jovian was born in the spring of 1994 at the Duke Lemur Center to parents Nigel and Flavia.

All content from Kiddle encyclopedia articles (including the article images and facts) can be freely used under Attribution-ShareAlike license, unless stated otherwise. Cite this article:
Jovian Facts for Kids. Kiddle Encyclopedia.