A loquat is a tropical fruit that grows on a tree. Since it is tropical, it will only grow in a warm, wet climate.

Loquats are yellow or orange and contain large brown seeds. People eat the skin or peel the fruit.

Eriobotrya japonica is a large evergreen shrub or small tree, with a rounded crown, short trunk and woolly new twigs. The tree can grow to 5–10 metres (16–33 ft) tall, but is often smaller, about 3–4 metres (10–13 ft). The fruit begins to ripen during Spring to Summer depending on the temperature in the area. The leaves are alternate, simple, 10–25 centimetres (4–10 in) long, dark green, tough and leathery in texture, with a serrated margin, and densely velvety-hairy below with thick yellow-brown pubescence; the young leaves are also densely pubescent above, but this soon rubs off. 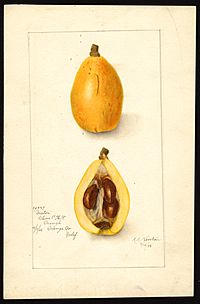 Loquats are unusual among fruit trees in that the flowers appear in the autumn or early winter, and the fruits are ripe at any time from early spring to early summer. The flowers are 2 cm (1 in) in diameter, white, with five petals, and produced in stiff panicles of three to ten flowers. The flowers have a sweet, heady aroma that can be smelled from a distance.

Loquat fruits, growing in clusters, are oval, rounded or pear-shaped, 3–5 centimetres (1–2 in) long, with a smooth or downy, yellow or orange, sometimes red-blushed skin. The succulent, tangy flesh is white, yellow or orange and sweet to subacid or acid, depending on the cultivar.

Each fruit contains from one to ten ovules, with three to five being most common. A variable number of the ovules mature into large brown seeds (with different numbers of seeds appearing in each fruit on the same tree, usually between one and four). The skin, though thin, can be peeled off manually if the fruit is ripe. In Egypt, varieties with sweeter fruits and fewer seeds are often grafted on inferior quality specimens.

The fruits are the sweetest when soft and orange. The flavour is a mixture of peach, citrus and mild mango. 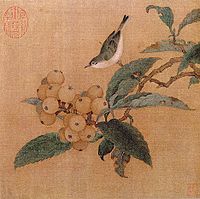 Loquats and a Mountain Bird, by an anonymous Chinese artist of the Southern Song Dynasty (1127–1279).

The loquat is originally from China (the Chinese name is pipa, cognate with the pipa instrument) where related species can be found growing in the wild. It was introduced into Japan and became naturalised there in very early times; it has been cultivated there for over 1,000 years. It has also become naturalised in Georgia, Armenia, Afghanistan, Australia, Azerbaijan, Bermuda, Chile, Kenya, India, Iran, Iraq, South Africa, the whole Mediterranean Basin, Pakistan, New Zealand, Réunion, Tonga, Central America, Mexico, South America and in warmer parts of the United States (Hawaii, California, Texas, Louisiana, Mississippi, Alabama, Florida, Georgia, and South Carolina). Chinese immigrants are presumed to have carried the loquat to Hawaii and California. It has been cultivated in Japan for about 1,000 years and presumably the fruits and seeds were brought back from China to Japan by the many Japanese scholars visiting and studying in China during the Tang Dynasty.

The loquat was often mentioned in ancient Chinese literature, such as the poems of Li Bai.

Over 800 loquat cultivars exist in Asia. Self-fertile variants include the 'Gold Nugget' and 'Mogi' cultivars. The loquat is easy to grow in subtropical to mild temperate climates where it is often primarily grown as an ornamental plant, especially for its sweet-scented flowers, and secondarily for its delicious fruit. The boldly textured foliage adds a tropical look to gardens, contrasting well with many other plants. It is popular in the American South. 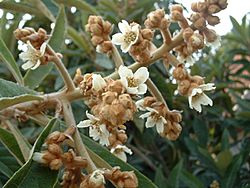 Loquat in flower. This is a cultivar intended for home-growing, where the flowers open gradually resulting in fruit also ripening gradually. 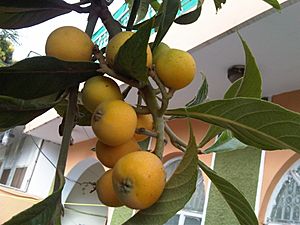 In temperate climates it is grown as an ornamental with winter protection, as the fruits seldom ripen to an edible state. In the United Kingdom, it has gained the Royal Horticultural Society's Award of Garden Merit.

In the highland parts of Central America, the loquat has become naturalized, and is often found growing wild in areas that have been disturbed but abandoned, its seeds having been dispersed by birds. Below 1000 meters, the fruit remains inedible for its high acidity, but above it, the wild fruit is appreciated and much harvested for its sweet, fruity flavor. It is occasionally planted for living fenceposts, as the tree is long-lived, not much subject to disease, and the wood is hard and durable. Good quality logs are much sought-after by furniture makers in Central America, who prize its hardness and durability .

In the US, the loquat tree is hardy only in USDA zones 8 and above, and will flower only where winter temperatures do not fall below 30 °F (−1 °C). In such areas, the tree flowers in autumn and the fruit ripens in late winter. 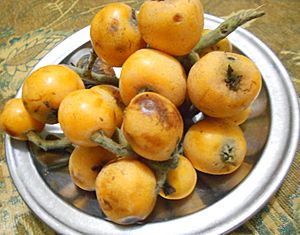 The loquat has a high sugar, acid, and pectin content. It is eaten as a fresh fruit and mixes well with other fruits in fresh fruit salads or fruit cups. The fruits are also commonly used to make jam, jelly, and chutney, and are often served poached in light syrup. Firm, slightly immature fruits are best for making pies or tarts.

The fruit is sometimes canned. The waste ratio, however, is 30 percent or more, due to the seed size.

The fruit is also processed into confections.

Loquats can also be used to make light wine. It is fermented into a fruit wine, sometimes using just the crystal sugar and white liquor.

All content from Kiddle encyclopedia articles (including the article images and facts) can be freely used under Attribution-ShareAlike license, unless stated otherwise. Cite this article:
Loquat Facts for Kids. Kiddle Encyclopedia.