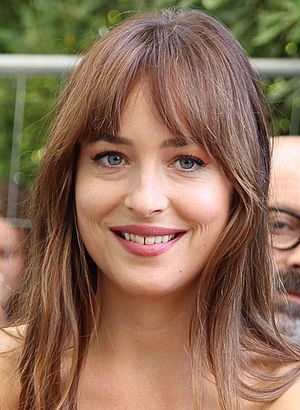 Dakota Johnson (born October 4, 1989 in Austin, Texas) is an American Actress and Model. She is the daughter of the actors Melanie Griffith and Don Johnson. Her maternal grandmother is actress Tippi Hedren.

Johnson first appeared onscreen with her mother in the comedy-drama movie Crazy in Alabama in 1999.

She was named Miss Golden Globe in 2006.

After high school, Johnson went back to acting. She had roles in movies, including 21 Jump Street, The Social Network and Need for Speed.

All content from Kiddle encyclopedia articles (including the article images and facts) can be freely used under Attribution-ShareAlike license, unless stated otherwise. Cite this article:
Dakota Johnson Facts for Kids. Kiddle Encyclopedia.