Melanie Griffith (born August 9, 1957) is an American actress. She is the daughter of Tippi Hedren. She has been in many motion pictures. She is an Academy Award nominee and Golden Globe winner for her performance in the 1988 movie Working Girl.

She graduated from Hollywood Professional School when she was 16 years old.

Griffith began work at nine months old in a commercial. 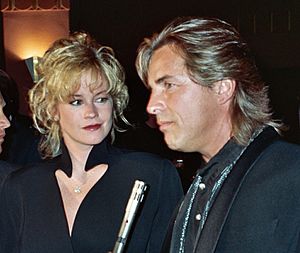 At the 1990 APLA benefit with Don Johnson 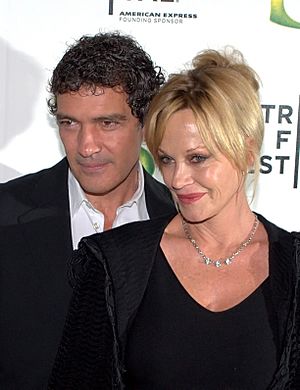 Griffith with Antonio Banderas at the Shrek Forever After premiere (2010)

At age 14, Griffith began dating 22-year old actor Don Johnson. He co-starred with her mother in The Harrad Experiment. Griffith was an extra. They had a six-month marriage in 1976.

Griffith and Antonio Banderas began a relationship in May 1995 when they began filming Two Much. The couple married on May 14, 1996. Their daughter, Stella del Carmen Banderas Griffith, was born on September 24, 1996. Griffith and Banderas divorced in 2015.

All content from Kiddle encyclopedia articles (including the article images and facts) can be freely used under Attribution-ShareAlike license, unless stated otherwise. Cite this article:
Melanie Griffith Facts for Kids. Kiddle Encyclopedia.