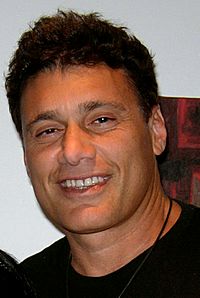 Bauer was born in Havana. His family moved to the United States on July 4, 1960. He grew up using the name Steven, an English form of his given name, Esteban. He has been married four times, each ending in divorce. His first wife was actress Melanie Griffith. He has two children.

All content from Kiddle encyclopedia articles (including the article images and facts) can be freely used under Attribution-ShareAlike license, unless stated otherwise. Cite this article:
Steven Bauer Facts for Kids. Kiddle Encyclopedia.