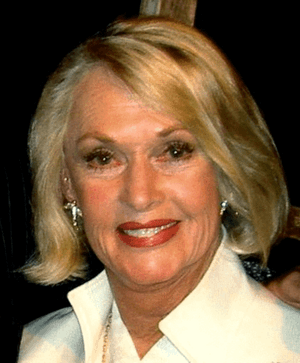 Tippi Hedren (born Nathalie Kay Hedren, January 19, 1930) is an American actress. Her paternal grandparents were Swedish immigrants. Her maternal ancestry is German and Norwegian. She is best known for her performances in two movies directed by Alfred Hitchcock: The Birds and Marnie. She is the mother of actress Melanie Griffith and has acted in movies with her daughter.

All content from Kiddle encyclopedia articles (including the article images and facts) can be freely used under Attribution-ShareAlike license, unless stated otherwise. Cite this article:
Tippi Hedren Facts for Kids. Kiddle Encyclopedia.