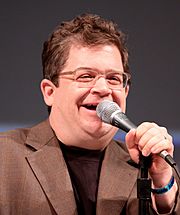 Patton Oswalt (born January 27, 1969) is an American comedian, writer, movie, television, stage, and voice actor known for roles such as Spencer Olchin in The King Of Queens and as the voice of Remy in Ratatouille.

Oswalt was born on January 27, 1969 in Portsmouth, Virginia. He was married to Michelle Eileen McNamara from 2005 until her death in 2016. They have a daughter.

All content from Kiddle encyclopedia articles (including the article images and facts) can be freely used under Attribution-ShareAlike license, unless stated otherwise. Cite this article:
Patton Oswalt Facts for Kids. Kiddle Encyclopedia.