Ashburn is a census-designated place (CDP) in Loudoun County, Virginia, United States. As of the 2010 United States Census, its population was 43,511, up from 3,393 twenty years earlier. It is 30 miles (48 km) northwest of Washington, D.C., and part of the Washington metropolitan area.

Ashburn is a major hub for Internet traffic, due to its many data centers. Andrew Blum characterized it as the "bullseye of America's Internet".

Ashburn was originally called Farmwell (variant names include Old Farmwell and Farmwell Station) after a nearby mansion of that name owned by George Lee III. The name "Farmwell" first appeared in George Lee's October 1802 will and was used to describe the 1,236 acre (5.0 km²) plantation he inherited from his father, Thomas Ludwell Lee II. A section of Farmwell plantation west of Ashburn Road, a 580-acre (2.3 km²) tract, was purchased in 1841 as a summer home by John Janney, a Quaker lawyer who nearly became Vice President of the United States. Janney called the property Ashburn Farm; the name's first known appearance in writing is 1870, when he sold the property. It is likely he named the farm after family friends whose name was "Ashburn".

The Belmont Manor House and Janelia are listed on the National Register of Historic Places.

The Ashburn area consists of many major and minor subdivisions such as Ashbrook, Ashburn Farm, Ashburn Village, the Courts and Ridges at Ashburn, Belmont Greene, Belmont Country Club, Brambleton, Broadlands and the Village of Waxpool.

The United States Census Bureau defines Ashburn as a census-designated place (CDP). As of the 2010 census, the CDP had a population of 43,511 residents, while the larger ZIP Code Tabulation Area (ZCTA) for Ashburn's 20147 ZIP code contained 54,086 people.

Many of its residents commute into Washington, D.C. and the surrounding suburbs such as Tysons Corner and Reston to their places of employment. The median household income as of 2009 was $100,719. Median age in Ashburn is 31.6. Ashburn's population is made up of 49% males and 51% females.

The racial makeup of the CDP was 67.1% White (59.1% non-Hispanic White), 8.2% Black or African American, 0.2% Native American, 17.1% Asian, 0.0% Pacific Islander, and 5.4% from two or more races. Hispanic or Latino people of any race made up 11.8% of the population. The total number of households accounted for in Ashburn was 22,555. The median household size is 2.9 persons. 98% percent of Ashburn residents have a high school degree. Some 42 percent of Ashburn's population holds a four-year bachelor's degree; 18 percent holds graduate degrees.

One Loudoun, a new multimillion-dollar residential, sports, and entertainment development designed to be the downtown area of Loudoun County, and contains the Alamo Drafthouse Cinema, restaurants, and housing, as well as the Edelman Financial Field, a planned baseball stadium designed to be the centerpiece of the area.

Located within the Dulles Technology Corridor, Ashburn is home to many high-tech businesses. World Trade Center Dulles Airport is the second World Trade Center in the state. Verizon Business has a major office in Ashburn at the location replacing MCI WorldCom's headquarters after its acquisition. Ashburn is also home to government contractor Telos.

Ashburn is a major hub for data centers, largely due to the Equinix location there. Among other websites, the Wikimedia Foundation (parent of Wikipedia) and Amazon Web Services have data centers there. 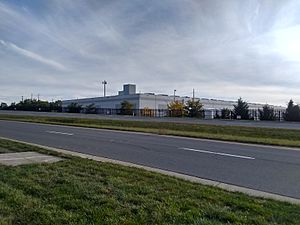 The George Washington University's Virginia Science and Technology Campus and the Howard Hughes Medical Institute's Janelia Research Campus are located north of Ashburn in the University Center and Lansdowne CDPs, respectively. Redskins Park, the training camp for the Washington Commanders of the National Football League, is located in the east part of Ashburn.

George Washington University and Strayer University have campuses in the area. In December 2009, it was announced that George Mason University was planning to set up a campus in Ashburn, to be located at Exit 6 off the Dulles Greenway.

Educational institutions in Ashburn are operated by the Loudoun County Public Schools.

Ashburn's fire and emergency medical services are provided by a combination of the volunteers of Ashburn Volunteer Fire-Rescue Department and the Loudoun County Department of Fire, Rescue & Emergency Management. AVFRD is a company under LCFR, and serves Ashburn with Stations 6 and 22, which is located next to Loudoun Hospital. LCFR operates the 24-7 career Moorefield Station 23, the first of its kind in the county. The Ashburn area is served by the Inova Ashburn Healthplex Emergency Room at the corner of the Dulles Greenway and Loudoun County Parkway as well as Inova Loudoun Hospital, located less than 2 miles (3.2 km) from Ashburn in neighboring Lansdowne, and by larger hospitals in the Washington suburbs and city.

All content from Kiddle encyclopedia articles (including the article images and facts) can be freely used under Attribution-ShareAlike license, unless stated otherwise. Cite this article:
Ashburn, Virginia Facts for Kids. Kiddle Encyclopedia.