Collingwood is a town in Simcoe County, Ontario, Canada. It is situated on Nottawasaga Bay at the southern point of Georgian Bay.

The land in the area was first inhabited by the Iroquoian-speaking Petun nation, which built a string of villages in the vicinity of the nearby Niagara Escarpment. They were driven from the region by the Iroquois in 1650 who withdrew from the region around 1700. European settlers and freed Black slaves arrived in the area in the 1840s, bringing with them their religion and culture.

Collingwood was incorporated as a town in 1858, nine years before Confederation, and was named after Admiral Cuthbert Collingwood, Lord Nelson's second in command at the Battle of Trafalgar, who assumed command of the British fleet after Nelson's death.

The area had several other names associated with it, including Hurontario (because it lies at the end of Hurontario Street, which runs from Lake Huron — of which Georgian Bay is a part — south to Lake Ontario), Nottawa, and Hens-and-Chickens Harbour, because of one large and four small islands in the bay.

In 1855, the Ontario, Simcoe & Huron (later called the Northern) Railway came into Collingwood, and the harbour became the shipment point for goods destined for the upper Great Lakes ports of Chicago and Port Arthur-Fort William (now Thunder Bay). Shipping produced a need for ship repairs, so it was not long before an organized shipbuilding business was created. On May 24, 1883, the Collingwood Shipyards, formally known as Collingwood Dry Dock Shipbuilding and Foundry Company Limited, opened with a special ceremony. On September 12, 1901, the Huronic, the first steel-hulled ship in Canada, was launched in Collingwood. The shipyards produced Lakers and during World War II contributed to the production of corvettes for the Royal Canadian Navy. Shipbuilding was one of the principal industries in the town, employing as much as 10% of the total labour force. However, overseas competition and overcapacity in shipbuilding in Canada led to the demise of shipbuilding in Collingwood in September 1986. 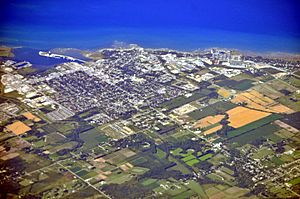 Aerial view of Collingwood from the southwest (2013) 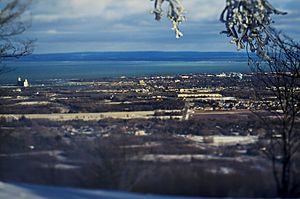 View of Collingwood, Ontario from the top of Blue Mountain Resort

Today, Collingwood's industrial base, which includes Pilkington Glass of Canada, Goodall Rubber Company - Canada ULC, and VOAC Inc, and which are among the community's largest employers, has begun to erode.

In June 2007, Collingwood Ethanol (now Amaizeingly Green) began production in the former Nacan facility. The company expected to produce 50 million litres of ethanol annually to satisfy regulatory requirements on ethanol content in gasoline mandated by the provincial and federal governments. Collingwood Ethanol also produces byproducts of the ethanol manufacturing process, including an organic corn gluten fertilizer. Petitions have been submitted to the town by residents of a new housing development located across the road in an effort to force Collingwood Ethanol to reduce the amount of odour and noise that they are causing during the times when they are in full production. Before Collingwood Ethanol started production, however, Nacan (a starch plant that once occupied the now ethanol plant) also created a strong odour and noise. This made many locals wonder why a housing development would be built across the road from an industrial part of town. In December 2012, Amaizeingly Green filed for receivership of the plant. Due to the higher cost of corn, the plant has since been closed. Demolition of the plant started Dec 2018.

Located on the southern shores of Georgian Bay and close to Blue Mountain, a promontory of the Niagara Escarpment, the town is a major recreation area for the southern part of the province. Blue Mountain itself is noted for skiing, and also for its Scenic Caves. The town is also a short distance from Wasaga Beach Provincial Park, a destination that received the title of Biosphere Reserve in 2004.

Local media include the Collingwood Today News and Collingwood-Wasaga Connection community newspapers, and radio station CKCB-FM. The Barrie-based regional television station CKVR-TV maintains a bureau in Collingwood, and the Owen Sound-based Bayshore Broadcasting radio group also has an office in Collingwood. The Collingwood annual week-end Elvis Presley festival attracted Elvis impersonators from the world over for 25 years but as of 2020 municipal support has been discontinued.

The climate of Collingwood is humid continental. The town is located in the snow belt region and receives modest amounts of both snow and rain through the year.

In the spring months there is a gradual warming due to the proximity of Georgian Bay. Frequent shower pass over the region this time of year and later on in the season can turn into severe storms. Temperatures this time of year range from −5 °C to 22 °C.

In the summer months, there are warm to hot humid conditions with frequent lake breezes to cool things off. Thunderstorms are regular occurrences in the summer and can sometimes be severe enough to cause tornadoes. Temperatures this time of year can range from 11 °C to 26 °C. The humidity will often make it feel much hotter than the actual temperature and can even make it feel like the mid 40 °C.

Winter is a very cloudy and cool wet time of year with frequent wind and frosts. Sometimes winter thaws will occur and the town may go multiple days above the freezing mark melting much of the snow. This will usually happen when a strong storm is approaching from the west.

The mayor is Brian Saunderson, with the next municipal elections for mayor, deputy mayor, and seven councillors scheduled for October 2022.

Collingwood is within the Simcoe—Grey riding for both federal and provincial elections. The federal Member of Parliament is Conservative Terry Dowdall, and the Member of Provincial Parliament is Jim Wilson who sits as an independent. 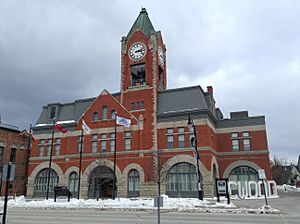 The area, which surrounds the town's downtown core contains 260 properites and several landmarks, including the Shipyards redevelopment on former site of Collingwood Shipbuilding, Collingwood Terminals grain elevator, and the town hall.

The portion of Simcoe Street that lies within the Collingwood Heritage Conservation District is informally known as Creative Simcoe Street. The neighbourhood is home to several artist's studios, art galleries and restaurants. It also includes the Collingwood Museum and Collingwood Public Library, the historic Tremont House building, as well as the Simcoe Street Theatre, which is managed by the Town of Collingwood Department of Parks, Recreation, and Culture.

The two-block stretch of Simcoe Street intersects the main street, Hurontario Street, to the West, connecting the neighbourhood to the Collingwood downtown. It ends at St. Paul Street to the East, at the Eastern border of the Heritage Conservation District.

The Creative Simcoe Street name is used by local media, businesses and tourism groups however, the neighbourhood is not formally recognized by the Town.

Collingwood is served by Highway 26, which runs along the shore of Nottawasaga Bay, and county road 124 (which was part of Highway 24 before the provincial government downgraded that portion of the highway in 1998). The town is also served by a rail trail along the former Barrie Collingwood Railway section of what had been the Ontario, Simcoe and Huron Union Railway, connecting Collingwood to the towns of Owen Sound and Barrie, with a spur heading north through the town's central business district, to the large grain elevators at the downtown wharf, where trains would load and unload onto ships.

Colltrans is the Town of Collingwood's local public transit system. Simcoe County LINX, the region's intercommunity transit service, serves stops at downtown Collingwood, the Collingwood Hospital, and Collingwood Collegiate Institute, connecting the town to cities like Barrie, where it is possible to connect to inter-regional services such as GO Transit and Ontario Northland.

In addition to Collingwood's position as a lake port, it is also served by Collingwood Airport (CNY3), a medium-sized airport about 4 miles (7.4 km) south of the town.

At the 2011 census, Collingwood was the fastest growing census agglomeration in Canada east of Manitoba.

Collingwood is a destination for winter and summer recreational activities such as swimming, hiking, biking, snowshoeing, cross-country skiing, snowboarding, and downhill skiing. Both private and public organizations are available to the public. There is a network of trails that allow this, including the Georgian Trail which connects to the Bruce Trail.

The first hockey rink in Collingwood was located on the west side of Pine Street in 1883, with public skates every Tuesday night. Interest in hockey peaked in the 1890s with the first recognized hockey game played in 1894 against a team from Barrie. Collingwood joined Barrie and Bradford in a Simcoe County league in 1894 and was granted a team in the newly formed Ontario Hockey Association in 1895.

It was also known for the internationally-recognized Elvis Festival that began in 1995 and retired in 2019 after 25 years. The festival attracted Elvis impersonators from all over the world each year.

All content from Kiddle encyclopedia articles (including the article images and facts) can be freely used under Attribution-ShareAlike license, unless stated otherwise. Cite this article:
Collingwood, Ontario Facts for Kids. Kiddle Encyclopedia.