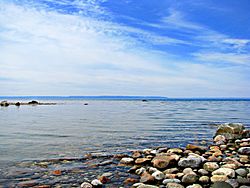 Nottawasaga Bay is a sub-bay within Georgian Bay in Southern Ontario, Canada located at the southernmost end of the main bay. The communities located on Nottawasaga Bay are Meaford, The Blue Mountains, Collingwood, Wasaga Beach and Tiny.

The western shore of Nottawasaga Bay is determined by the Niagara Escarpment, which reaches Nottawasaga Bay between Collingwood and Thornbury. The southern shore is flat limestone plain, with cedar marshes. The Nottawasaga River flows into Georgian Bay near the southern end of the bay, and onward to the east the shore is predominantly sand dunes and marshes created by the strong predominant northwest winds. This part of Nottawasaga Bay is heavily built up with summer homes. Nearer to Thornbury and the Beaver River Valley there are some vineyards and many apple orchards dot the area.

(from west to east)

All content from Kiddle encyclopedia articles (including the article images and facts) can be freely used under Attribution-ShareAlike license, unless stated otherwise. Cite this article:
Nottawasaga Bay Facts for Kids. Kiddle Encyclopedia.