Artesia (Spanish for "artesian aquifer") is a city in southeast Los Angeles County, California. Artesia was incorporated on May 29, 1959, and is one of Los Angeles County's Gateway Cities. The city has a 2010 census population of 16,522. Artesia is surrounded on the west, south, and east sides by Cerritos, with Norwalk to the north. Artesia is the home of the East West Ice Palace, an ice rink which is co-owned by Michelle Kwan. It was also the childhood home of former First Lady Pat Nixon, who lived there from 1914 to 1931, though the property on which she grew up is now part of neighboring Cerritos.

The village of Artesia was established upon the completion of the Artesia School District on May 3, 1875. It was named for the many flowing Artesian wells in the area, which made the village ideal for farming and agriculture.

In the 1920s and 1930s, Dutch and Portuguese farmers developed Artesia into one of the most important dairy districts in Southern California. After World War II, as with many other cities in the region, Artesia was pressured by developers to build residential tracts. The city of Dairy Valley was incorporated in 1956, and later became the city of Cerritos. As the demand for housing continued, dairymen moved their operations further east into Chino and north into the Central Valley. Artesia finally incorporated on May 29, 1959.

In 1993, the Artesia Historical Society was formed, with the mission of preserving and protecting the archives and historic sites of the city. In 2002, the Historical Society salvaged and restored one of the last remaining Spanish styled homes in the city into a historical civic museum open to the public.

One of the more familiar landmarks in the city is the Artesia water tower. Not much is known about its active past or when it was constructed. The City of Artesia is currently trying to have the tower declared as a Historical Landmark and is asking its citizens for historical information and photos of the tower.

The water tower can hold 50,000 gallons of water and was once owned by the Southern California Water Company before being sold to the City of Artesia in 1988. The tower was intended to be used only as a point of historical interest, and to provide a special identity to the community. Shortly after its purchase, the then green tower was quickly painted to its current color with the addition of the name Artesia painted on two sides.

It sits on top of an artesian well; built in 1911. However, no record of its construction can be found. Although it may have once been a smaller wooden tower, to qualify for historic designation in California, factual documentation must be presented.

The Artesia water tower was also featured in the motion picture, Freddy's Dead: The Final Nightmare in 1991 and was known in the film as the Springwood Water Tower.

There are a large number of Indian-owned stores and restaurants along Pioneer Blvd. in Artesia. Despite this concentration of Indian-owned businesses, Asian Indians made up only 7.9% of the population of Artesia in the 2010 Census.

Proposals have often been made to designate a portion of the city as "Little India" (along the lines of Little Saigon in nearby Westminster and Garden Grove). Another proposal has been for a "Little India" sign at the Pioneer Blvd. exit off of the Artesia Freeway. Opposition, primarily from other ethnicities in the city, has so far balked such plans.

According to the LA Times article, "Artesia Thinks the World of Itself," four of five City Council members were outraged at Assemblyman Rudy Bermudez's attempt to make the designation without consulting the local council. The council members won a bill requiring local approval of proposed freeway sign designations. Mayor Larry Nelson said that Indian Americans constituted less than 1% of the city's population and that East Asian markets outnumber Indian ones 3 to 1. Thus, the name is "International and Cultural Shopping District."

According to the United States Census Bureau, the city has a total area of 1.6 square miles (4.1 km2), all land.

According to the 2010 United States Census, Artesia had a median household income of $59,845, with 13.5% of the population living below the federal poverty line. 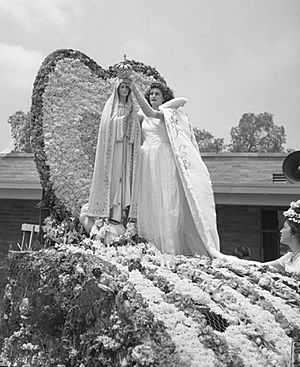 For Europeans, 9.4% of Artesia is of Portuguese ancestry, with 49.4% of those foreign-born. Dutch is the second most commonly reported European ancestry at 4.6%.

3.6% of Artesia is Black or African American.

Artesia residents are served by the ABC Unified School District.

Fire protection in Artesia is provided by the Los Angeles County Fire Department with ambulance transport by Care Ambulance Service.

All content from Kiddle encyclopedia articles (including the article images and facts) can be freely used under Attribution-ShareAlike license, unless stated otherwise. Cite this article:
Artesia, California Facts for Kids. Kiddle Encyclopedia.