Kids Encyclopedia Facts
Not to be confused with Chico, California.

Chino is a city in San Bernardino County, California, United States. It is located in the western end of the Riverside-San Bernardino Area and it is easily accessible via the Chino Valley (71) and Pomona (60) freeways.

Chino and its surroundings have long been a center of agriculture and dairy farming, serving the considerable demands for milk products in Southern California and much of the southwestern United States. Chino's rich agricultural history dates back to the Spanish land grant forming Rancho Santa Ana del Chino. The area specialized in orchard, row crops and dairy. Downtown Chino is home to satellite branches of the San Bernardino County Library and Chaffey Community College, the Chino Community Theatre, the Chino Boxing Club and a weekly Farmer's Market. In 2008, the city of Chino was awarded the prestigious "100 Best Communities for Youth" award for the second time in three years. Chino hosted shooting events for the 1984 Summer Olympics at the Prado Olympic Shooting Park in the Prado Regional Park. Two California state prisons for adults (California Institution for Men and California Institution for Women), as well as the Heman G. Stark Youth Correctional Facility, lie within the city limits.

The land grant on which the town was founded was called Rancho Santa Ana del Chino. Santa Ana is Spanish for Saint Anne, but the exact meaning of "Chino" has been explained in different ways. One explanation is that the "Chino" (curly-haired person or mixed-race person) was the chief of the local Native American village. The president of the Chino Valley Historical Society, drawing on US Civil War-era letters, designates the "curl" referenced in the toponym as that at the top of the grama grass that abounded in the valley.

The first inhabitants of Chino in modern times were the Tongva, who had a settlement called Wapijangna in the Santa Ana River watershed. Some residents of Wapijanga were baptized at Mission San Gabriel, which was established in 1771. The Spanish crown claimed the land, at least nominally, until Mexican independence was finalized and possession fell to the Mexican government.

Some twenty years later, Mexican governor of Alta California Juan Bautista Alvarado granted Rancho Santa Ana del Chino to Antonio Maria Lugo of the prominent Lugo family. Two years later, his successor, Governor Micheltorena, granted an additional three leagues to Lugo's son-in-law Isaac Williams, who took charge of the rancho. Williams kept large quantities of horses and cattle, which attracted the envy of raiding Native Americans as well as unscrupulous whites. One of the latter was James Beckwourth, who, in 1840, posed as an otter hunter and stayed at Rancho Chino to determine the location of the area's animals, which he then reported to Walkara, the Ute mastermind of the raids.

Early in the Mexican-American War, the Battle of Chino took place at Williams' rancho. The battle ended prior to the arrival of the Mormon Battalion, dispatched on behalf of the United States, who instead labored in the rancho's agricultural harvest and constructed a grist mill.

During the California Gold Rush, the rancho was a popular stopover for travelers, and in the mining fury, coal was discovered there. In 1850, California was admitted to the union, and the process of separating privately held lands from the public domain began. The Williams claim to the Chino Rancho was patented in 1869. 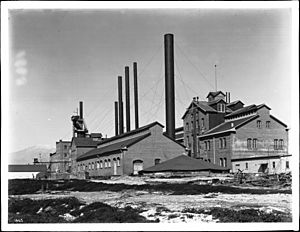 Richard Gird was the next owner of the Rancho. Beginning in 1887, his land was subdivided and laid out. It became the 'Town of Chino,' and incorporated into a city in 1910. Sugar beets, corn, and alfalfa were raised there.

The Chino Valley, located at the foot of an alluvial plain with fertile topsoil reaching depths of 4 feet, was an agricultural mecca from the 1890s up through the mid 20th century. Sugar beets were a significant part of the economy in the early 1900s, followed by sweet corn (marketed as "Chino corn" throughout the Pacific coast area), peaches, walnuts, tomatoes, and strawberries. The city's official logo/crest features an overflowing cornucopia. 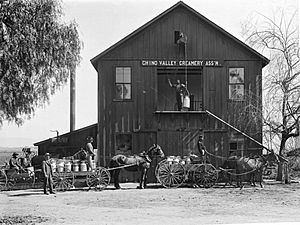 The dairy industry flourished from the 1950s through the 1980s, with dairy-friendly zoning in the southwest corner of San Bernardino County encouraging many ethnic Dutch families to locate there and become the cornerstone of the industry. Chino's large, highly efficient dairies made it the largest milk-producing community in the nation's largest milk-producing state.

Because of its pastoral setting and rural flavor, Chino was a popular site for Hollywood crews to shoot "midwestern" settings. 1960's movies included Bus Riley's Back in Town starring Ann-Margret and Michael Parks; The Stripper, with Joanne Woodward, and the mid-60s TV series Twelve O'Clock High, re-fashioning Chino's rural airport as a British airfield with quonset huts among farm fields.

In the 1970s, Chino developed into a small suburban city, forming the western anchor of the Inland Empire region, and now the city's development has gradually taken on a more middle-class character. There are still many industrial areas as well as farm animals such as goats and chickens. According to the 2004 FBI UCR, the city had about 3.6 violent crimes per 1,000 population, which is typical for an American suburb, and its property crime below average.

According to the Köppen Climate Classification system, Chino has a warm-summer Mediterranean climate, abbreviated "Csa" on climate maps.

According to the 2010 United States Census, Chino had a median household income of $71,671, with 9.6% of the population living below the federal poverty line.

There were 17,304 households out of which 47.3% had children under the age of 18 living with them, 62.5% were married couples living together, 12.9% had a female householder with no husband present, and 18.5% were non-families. 14.1% of all households were made up of individuals and 5.2% had someone living alone who was 65 years of age or older. The average household size was 3.4 and the average family size was 3.8.

The term Chino is often mentioned in music and television but usually in reference to the prison located there and not the city.

All content from Kiddle encyclopedia articles (including the article images and facts) can be freely used under Attribution-ShareAlike license, unless stated otherwise. Cite this article:
Chino, California Facts for Kids. Kiddle Encyclopedia.