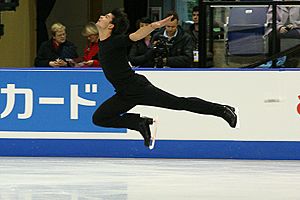 Stéphane Lambiel (born 2 April 1985 in Martigny, Valais) is a figure skater from Switzerland. He is famous for his very good spins.

Lambiel was a good skater as a child. When he was 12 years old, he was picked to perform an exhibition at the 1997 World Championships.

He has won the Swiss national championships every year he has entered them, and at every level.

Lambiel is famous for having everything a skater needs to do well, called the "full package". He is very artistic, and has all the technical elements needed, including a quadruple jump. He is very consistent, except for the triple axel, which is a bad jump for him.

Lambiel has had a lot of injuries, which has kept him out of the Grand Prix a lot. After the Olympics, he did not feel very motivated. He missed the 2007 European Championships because he said he was burnt out. But he came back for the 2007 World Championships, where he won the bronze medal.

In 2010 he said he was no longer going to compete in skating.

All content from Kiddle encyclopedia articles (including the article images and facts) can be freely used under Attribution-ShareAlike license, unless stated otherwise. Cite this article:
Stéphane Lambiel Facts for Kids. Kiddle Encyclopedia.