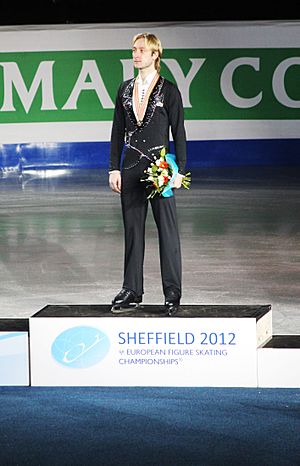 Plushenko during the men's medals ceremony at the 2012 European Figure Skating Championships.

Evgeni Plushenko (born 3 November 1982) is a figure skater from Russia. He was born and raised in the Soviet Union. He is the last of the "Soviet System" figure skaters, which took children from their parents at a young age and raised them in a training system away from home while giving them everything they needed, including housing and food and equipment, so they could become the best.

Plushenko was a very good skater as a child. At age 14, he won the World Junior Championships. At age 15, he won the bronze medal at the World Championships. He has always been coached by Alexei Mishin, a very famous Soviet and Russian skater coach. At the time of Plushenko's rise, Mishin was also coaching Alexei Yagudin. When Yagudin saw all the attention Mishin was giving Plushenko, it made Yagudin leave and find another coach. Plushenko and Yagudin had a very big rivalry that ended in 2002, when Yagudin won the Olympic Gold and Plushenko won the silver.

Between the 2002 Olympics and the 2006 Olympics, Plushenko only lost a competition twice. The first time was to Emanuel Sandhu at the 2003-2004 Grand Prix Final. The second was to Brian Joubert at the 2004 European Championships. Plushenko came close to losing the 2003 World Championships to American Timothy Goebel, but won.

Plushenko withdrew from the 2005 World Championships with injury. But he won the 2006 Olympics with a very big lead over everyone else there.

Plushenko took the 2006-2007 season away from skating. He was married and had a child, but he is now getting a divorce. He is trying to come back to competitive skating, but still has a lot of injuries.

All content from Kiddle encyclopedia articles (including the article images and facts) can be freely used under Attribution-ShareAlike license, unless stated otherwise. Cite this article:
Evgeni Plushenko Facts for Kids. Kiddle Encyclopedia.