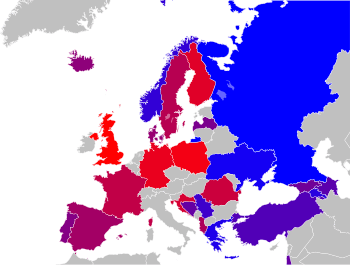 This map shows the placement of the participating countries. Russia, in blue, won.

The Eurovision Song Contest 2008 was a talent contest hosted in Belgrade, Serbia. It was won by Dima Bilan of Russia, singing the song "Believe". It was a big television event, watched by 250 million people around the world.

In 2008 the contest was split into two semifinals, with 19 countries in each semifinal. The first semifinal was held on May 20, second semifinal on May 22, and the final on May 24.

All content from Kiddle encyclopedia articles (including the article images and facts) can be freely used under Attribution-ShareAlike license, unless stated otherwise. Cite this article:
Eurovision Song Contest 2008 Facts for Kids. Kiddle Encyclopedia.