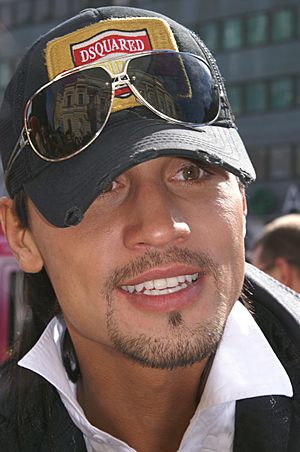 Dima Bilan (Russian: Дима Билан; born Viktor Belan on December 24, 1981) is a popular Russian singer. Bilan was in the 2006 Eurovision contest. He sang the song "Never Let You Go." He finished in second place. In the 2008 contest, he came back with song "Believe" and he won with 272 points.

In February 2007 Bilan started to record his first international album in English in Los Angeles, Miami and in Philadelphia in collaboration with producer Jim Beanz and Ryan Tedder. One of the new tracks will be a duet with one of Timbaland's most successful artists, Nelly Furtado.

All content from Kiddle encyclopedia articles (including the article images and facts) can be freely used under Attribution-ShareAlike license, unless stated otherwise. Cite this article:
Dima Bilan Facts for Kids. Kiddle Encyclopedia.