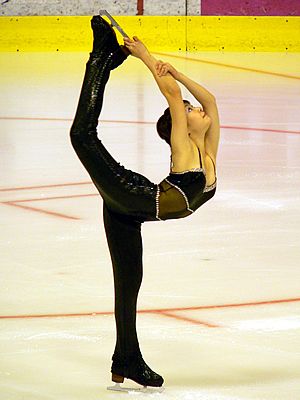 The Biellmann position performed as part of a spiral sequence 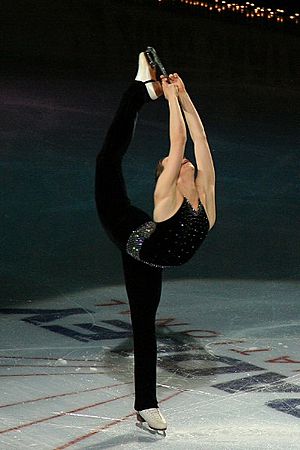 The classic Biellmann with both hands on the blade 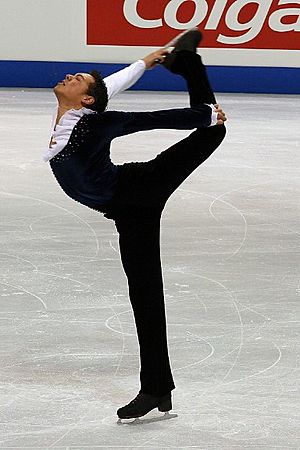 The spin has also been said to look like a tulip on a turntable. It is one of the most iconic figure skating moves. Along with the layback spin, the Biellmann is used in advertisements and icons representing figure skating. The position is also used in spiral sequences.

No one knows who invented the spin. Cecilia Colledge of Great Britain performed a one-handed Biellmann spin in 1937. There is a famous photograph of her doing the spin at the 1937 World Figure Skating Championships. Tamara Moskvina of the Soviet Union performed the spin at the 1965 European Championships and there is a famous photo of her doing it as well. Both Janet Champion and Slavka Kohout of the United States performed this spin early on.

The spin is named after Swiss skater Denise Biellmann, who popularized the move. Biellmann performed the spin beginning in the 1970s, having learned it from her teammate, fellow Swiss skater Karin Iten. Biellmann performed the spin on her way to becoming World Champion and the spin was officially named for her. It is the only figure skating spin officially named after a skater in International Skating Union regulations.

The classic positions is explained above. This position is often entered into through a layback spin. The free leg of the layback is grasped by one or both hands and brought up above the head.

Irina Slutskaya of Russia is officially credited with inventing the change foot Biellmann spin. She performs the Biellmann on one foot, then drops her free leg and performs the spin on her other leg.

A half-Biellmann spin, also called the catch-foot camel spin, is a Biellmann variation in which the free leg is grasped in a camel spin position and brought up above the head, but the upper body is not lifted into the teardrop position.

Many skaters have performed a Biellmann variation in which the free leg is brought down towards the face, with the knee bent inwards. This spin has mostly been performed by Junior-level or Junior-age skaters, because this is easiest to perform before puberty. It is unknown who invented this variation. It was performed by Naomi Nari Nam at the United States nationals in 1999. More recently it has been brought back by Junior level skaters including Caroline Zhang of the United States who performed the spin on her way to winning the 2007 World Junior title.

As well, Zhang and other Junior skaters are known for doing a hyper-extended Biellmann spin in which the leg is pulled straight up in the air and the back bent as far into the spin as possible. Zhang is able to perform the spin with her free leg pulled straight up into the air, making the spin look like a capital-I. This position is not original to Zhang, but she has been the one to popularize it.

Because of Code of Points, the Biellmann spin has been used too much in competitions. Many skaters would perform the spin even if they were not flexible enough because it was a good way of getting a lot of points. The International Skating Union has limited the number of Biellmann spins that can be performed in a single program.

The spin is almost entirely performed by women, and it is a common feature in most Junior and Senior level ladies programs, as well as being a position for ice dancing lifts. It is generally not performed by men because most male skaters are not flexible enough to perform the spin. The most famous male skater to perform the spin is Evgeni Plushenko. However, he has not done it in competition since 2003. Shawn Sawyer has also performed the spin at the Junior level. Recently, the spin has been performed in competition by Ryo Shibata of Japan and Eliot Halverson of the United States.

All content from Kiddle encyclopedia articles (including the article images and facts) can be freely used under Attribution-ShareAlike license, unless stated otherwise. Cite this article:
Biellmann spin Facts for Kids. Kiddle Encyclopedia.