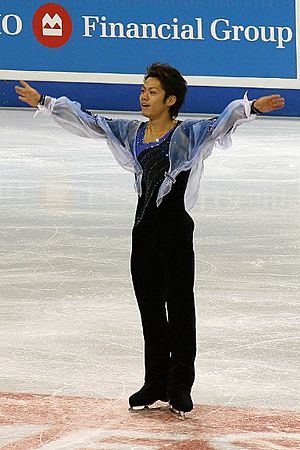 In this Japanese name, the family name is Takahashi.

Daisuke Takahashi (髙橋 大輔, Takahashi Daisuke, born March 16, 1986) is a Japanese athlete. He is best known as a figure skater.

Takahashi was born in Kurashiki, Okayama.

Takahashi won the Japanese national championships in 2006 and 2007.

He was a member of the Japanese team at the 2006 Winter Olympics at Turin in Italy. In 2010, he won a bronze medal in the Winter Olympic Games at Vancouver in Canada.

All content from Kiddle encyclopedia articles (including the article images and facts) can be freely used under Attribution-ShareAlike license, unless stated otherwise. Cite this article:
Daisuke Takahashi Facts for Kids. Kiddle Encyclopedia.