Patrick Lewis Wai-Kuan Chan was born December 31, 1990, in Ottawa, Ontario, Canada. He is the only child of Lewis Chan, a lawyer, and Karen, both immigrants from Hong Kong.

His Chinese name is Chan Wai-Kuan. At the age of five, Chan showed talent in downhill skiing, but focused on other sports after his family moved to Toronto. He has an enduring interest in many sports, including taekwondo, tennis, golf and mountain climbing.

Patrick Chan started skating in 1996. He originally wanted to learn to skate in order to play hockey, but soon became interested in figure skating. His coach, Osborne Colson, made him spend 30 minutes a day on basic stroking, edge work, cross-cutting and balance drills. Chan said, "I tell people I owe the flow in my knees and the flow I generate from my edges to Mr. Colson. He knew he had to pull everything apart and start from the ground up on the basics of skating." 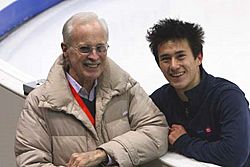 Chan divided his training time between World Arena Ice Hall in Colorado Springs, Colorado, and the Granite Club in Toronto.

Chan competed at the 2008 World Championships in March. He placed seventh in the short program and 11th in the free skating, placing ninth overall.

At the 2009 World Championships, Chan placed third in the short program, behind Brian Joubert and Evan Lysacek, and second in the free skate to win the silver medal behind Lysacek. He was eighteen. He also competed for Canada at the 2009 World Team Trophy. He placed fourth in the men's competition and Canada won the silver overall, behind the United States and ahead of Japan.

The 2010 Winter Olympics were held in Chan's home country, Canada. Chan placed seventh in the short program and then earned a new personal best score to place fourth in the free skate, finishing fifth overall.

Chan began his season at the 2010 Liberty Summer Competition where he debuted his new short program to the music of Take Five, a jazz piece. He placed first in the short program, landing his first 4T in competition and was awarded a high grade of execution for the jump. In the free skate, he missed the 4T, but landed a 3A-3T combination for his first time in competition, and took the gold medal.

At the 2011 World Championships held in Moscow after a delay of a month, Chan won the short program with a score of 93.02 points, a new world record. In the free skate, he picked up 187.96 points (another world record), giving him a total of 280.98 points for his two days of competition. In September, he received three Guinness World Records certificates for achieving world records in the short program, free skating, and overall score.

In February 2012, Chan competed in the 2012 Four Continents Championships. He placed first in the short program, 4.51 ahead of Takahito Mura, and in the free skate, 24.25 ahead of Daisuke Takahashi, and obtained a 10.00 for his program component scores. He won gold with a total score of 273.94 points.

In late March 2012, Chan competed at the 2012 World Championships in Nice, France, and won his second straight World title. He placed first in both segments and finished with a total of 266.11 points, 6.45 ahead of silver medalist Daisuke Takahashi. Some in the crowd booed the outcome. On April 16, 2012, news media reported that Chan had accepted Krall's resignation. He credited Krall with improving his quad jump.

During the season, Chan was coached by Kathy Johnson and Eddie Shipstead. He left his longtime choreographer Lori Nichol and asked Jeff Buttle and David Wilson to produce his competitive programs.

In January, at the 2013 Canadian Championships, Chan ranked first in both segments and won his sixth Canadian national title. At the 2013 World Championships, held in London, Ontario, Canada, Chan won the short program  earning 6.81 points more than Denis Ten from Kazakhstan. He set a new world record. He committed some mistakes in his jumps in the free skating and placed second in that segment. He finished first with 267.78 points overall, edging Ten for the gold medal by 1.3 points. It was Chan's third consecutive World title.

In the 2013–14 ISU Grand Prix season, Chan won both the 2013 Skate Canada International and the 2013 Trophée Éric Bompard with a world record score at the time in both the short program and the free skate. He finished second in the Grand Prix Final, behind Yuzuru Hanyu of Japan.

At the 2014 Winter Olympics, Patrick Chan competed in the team event. He skated the men's short program and placed third, contributing to Canada's silver medal finish.

During the individual event, Chan ranked second in the short program, scoring 3.93 points less than Hanyu's world record score and more than ten points ahead of the rest of the field. Hanyu's program featured the same jumps as Chan, but he had achieved better quality and amplitude on the jumps, particularly the triple axel. Hanyu fell twice during his free skate and had another triple discounted for putting his foot down in the middle of a jump sequence, while Chan struggled on several of his jumps including a miss on a relatively simple double Axel. As a result, Hanyu outscored Chan in the free skate by 0.54 points to take the gold medal, while Chan received the silver medal. 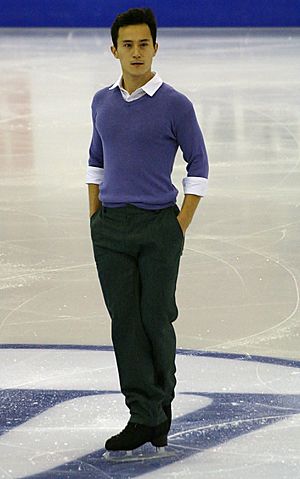 During the spring of 2015, Chan confirmed in several interviews that he would start training for the 2015–2016 season.

Chan and Johnson decided they would move to Vancouver in July 2016. She resigned in August 2016, and the move to Vancouver was put on hold. On September 23, 2016, Chan announced that his new coaching team would be led by Marina Zueva, and his training base would be Canton, Michigan. He would stay in Canton for the entire season. 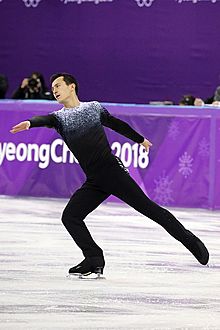 Chan skates his short program at the 2018 Olympics

Chan easily won a record-tying ninth Canadian national title. At the 2017 World Championships, he set his new personal best in the short program of 102.13, putting himself in medal contention in third place, but dropped to sixth after the long program. During the season, he attempted to incorporate a quadruple Salchow into his repertoire in response to the increasing jump difficulty of his top competitors.

In February, Chan represented Canada at his third Olympics, in Pyeongchang, South Korea. He won his first Olympic gold and third Olympic medal overall during the team event, defeating the Olympic Athletes from Russia. He skated both segments, ranking third in the short and first in the free skate. This earned 18 team points for Canada, six more than the Russian skater Mikhail Kolyada. In the individual men's event, Chan finished ninth after placing sixth in the short program and eighth in the free skate. He had tripled a quad attempt, doubled a triple, touched down with his hand on a triple axel, and stumbled on some of his footwork. He stated that this Olympic event was his last competition. He officially retired from competition on April 16, 2018.

All content from Kiddle encyclopedia articles (including the article images and facts) can be freely used under Attribution-ShareAlike license, unless stated otherwise. Cite this article:
Patrick Chan Facts for Kids. Kiddle Encyclopedia.