Pyeongchang is a county in the province of Gangwon-do, South Korea, located in the Taebaek Mountains region. It is home to several Buddhist temples, including Woljeongsa. It is about 180 km (110 mi) east southeast of Seoul, the capital of South Korea, and connected by expressways and high-speed passenger railways. Pyeongchang's slogan, "Happy 700 Pyeongchang", is taken from its average elevation of approximately 700 metres (2,300 ft).

Pyeongchang hosted the 2018 Winter Olympics and the 2018 Winter Paralympics. It was officially rebranded as "PyeongChang" (with a capital 'C') for the purposes of the 2018 Games, in order to avoid confusion with Pyongyang in North Korea.

When the Joseon Dynasty was founded in 1392, the region was promoted from a hyeon to a county (gun). After the territory was divided into 8 Provinces under the reign of King Taejong, it was involved in Gangwon-do. After the territory was divided into 23 districts in 1895 with the 8-provincial system abolished, it was included in Chugju-bu. When a 13-provincial system was enacted in 1896, it was involved in Gangwon-do. 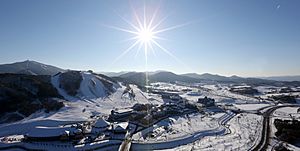 The altitude of Pyeongchang is wide-ranging, with 84% of its territory comprising mountains with average elevations of 750 m (2,460 ft).

The warmest months of the year are July and August, with January and February being the coldest. 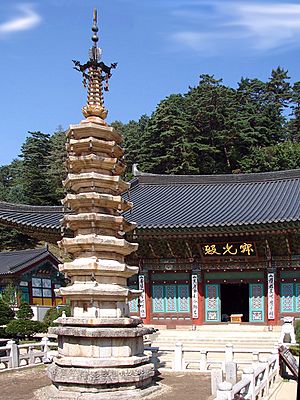 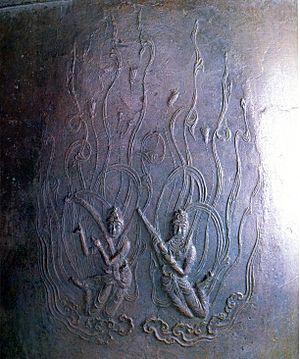 A part of Bell of Sangwonsa

The count of cultural heritage designations is as follows.

Sangwansa is a temple on Odaesan Mountain that was originally established as Jinyeowon in 705. Although the Joseon Dynasty's policy was the prohibition of Buddhism, it constantly donated to rebuild the temple. In 1401, King Taejong donated to the construction of Sajaam Hermitage. In 1465, King Sejo and administrators donated to rebuild the temple. Sejo's son, King Yejong designated it as a memorial for his father. During the Third Battle of Seoul, the United Nations Command ordered that the temple be burned, but a Buddhist monk prevented it. Instead, the Command agreed to burn only the doors of the temple.

Woljeongsa is a temple on Odaesan Mountain established by Jajang the monk in 643. After it was established, it was consistently rebuilt. During the Third Battle of Seoul, 10 buildings were totally destroyed by fire. Tanheo the monk restored Jeokgwangjeon, one of the burnt buildings, in 1964, and Manhwa the monk gradually reconstructed other buildings.

Pyeongchang is the hometown of Lee Hyo-seok, a Korean novelist, and this festival is held in Lee Hyo-seok Culture Village, where he grew up.

The Lee Seung-bok Memorial Hall is located in Nodong-ri, Yongpyeong-myeon to memorialize Lee Seung-bok who was a South Korean boy murdered by North Korean commandos in 1968. It was established in 1982, with building a memorial statue for Lee. Lee's house was restored in 2000. 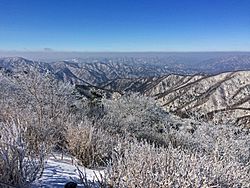 A snowscape of Odaesan National Park 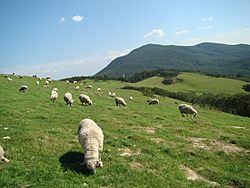 Odaesan Mountain is the home of historical Buddhist temples including Sangwonsa and Woljeongsa. It was designated as a national park in 1975. The highest peak, Birobong Peak is 1,563 m (5,128 ft) high.

Two major ski resorts in the county were the home of the 2018 Winter Olympics. Alpensia ski resort has six slopes for skiing and snowboarding, with runs up to 1,400.0 m (4,593.2 ft) long, for beginners and advanced skiers, and an area reserved for snowboarders. The resort is open year-round. Alpensia hosted the majority of the Olympic snow events. Yongpyong Resort, which has a total of 28 ski slopes, hosted the technical alpine skiing events.

Alpensia will be the focus of the 2018 Cultural Olympiad, with a new, purpose-built concert hall within the resort with an indoor water park.

Samyang Ranch is the largest highlands farm in Asia, located in the hills of Daegwallyeong at 850 to 1,470 meters above sea level. It is operated as a petting zoo and features a pastoral landscape. The ranch is operated by the leading Korean food and dairy company Samyang food, the first company to introduce ramyeon instant noodles into a poverty-ridden South Korea in the 1960s. It is the filming location of the drama Autumn in My Heart and the movie Lover’s Concerto.

All content from Kiddle encyclopedia articles (including the article images and facts) can be freely used under Attribution-ShareAlike license, unless stated otherwise. Cite this article:
Pyeongchang Facts for Kids. Kiddle Encyclopedia.