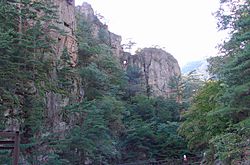 Odaesan National Park in the province of Gangwon South Korea

Gangwon-do is a province of South Korea. The capital is Chuncheon. Before Korea was divided in 1945, Gangwon and its North Korean half Kangwŏn were a single province. Gangwon-do is in the northeastern corner of South Korea. On the north it borders North Korea. It has a long coast along the Sea of Japan to the east. On the west it borders Gyeonggi-do. This is the province with the largest population in South Korea. In contrast most of Gangwon-do is made up of mountains and forests. The mountains get a good deal of snow in the winter. They are home to a number of popular ski resorts.

Gangwon-do has two islands, Ulleungdo and Dokdo. Japan and South Korea have had a long dispute over which country owns Dokdo (which Japan calls Takeshima). About 37 South Korean police guard the island and the waters around them.

The 2018 Winter Olympics are scheduled to take place in Gangwon province. Pyeongchang, Gangneung, and Jeongseon will host the events.

Gangwon Province is an important place for former transport links with North Korea. Today train services operate on the Gangwon and Cheongnyeonicheon Lines. Gangwon's marine transport center is Wonsan. There are modern facilities in Wonsan Harbor, which accounts for 4% of Gangwon's freight traffic.

All content from Kiddle encyclopedia articles (including the article images and facts) can be freely used under Attribution-ShareAlike license, unless stated otherwise. Cite this article:
Gangwon Province (South Korea) Facts for Kids. Kiddle Encyclopedia.