The Liancourt Rocks viewed from the North 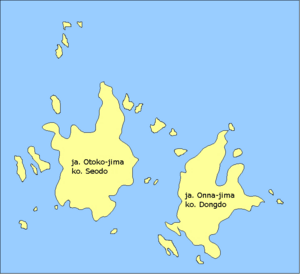 Liancourt Rocks (Takeshima 竹島 in Japanese, Dokdo 독도 in Korean) are a group of small islands in the Sea of Japan. The islands are currently occupied under the South Korean armed police. The name Liancourt Rocks comes from the French whaling ship Liancourt. The people on the Liancourt made a map of the islands in 1849. The islands have been in dispute for some time by both Korea and Japan. Japan has been suggesting to sort the dispute in International Court of Justice but South Korean government keeps refusing it.

Liancourt Rocks consists of two islets, that are 150 metres apart. These small islands are called West Islet and East Islet. The western islet is the larger of the two islets. Altogether, there are about 90 islets and reefs. The islands and rocks have a volcanic nature. A total of 37 of these islets are recognized as permanent land. The eastern islet formed 4.5 million years ago. Ulleungdo formed 2 million years later. Both are quickly eroding and weathering.

The western islet is made of a single peak. It has many caves along the coastline. The cliffs of the eastern islet are about 10 to 20 meters high. There are two caves giving access to the sea, as well as a crater.

40 Korean people are staying on the islets, several Korean telecom service providers (namely SK Telecom, KT, and LG U+) have also installed stations on Liancourt Rocks to cover the islets in the South Korean wireless telephone network. There is also regular ferry service from Ulleung-do.

Although the islets themselves are barely habitable, the Exclusive Economic Zone surrounding them has rich fishing grounds and possible reserves of natural gas. As of 2006, the expected reserves have not been found. A wide variety of fish as well as seaweed, kelp, sea slugs, and clams live around the islets. Major fishery catches in the area are squid, Alaskan pollock, codfish, and octopus. There are 102 species of seaweed, although many of these have no economic value.

This area used to be one of the largest breeding grounds of sea lions (Zalophus californianus japonicus) and a good spot for hunting them and also a spot for obtaining abalone at the end of the Meiji period (1868-1912). Until the 1950s, sea lions were observed on the islets by the voluntary guards.

Over 900 Korean citizens say that they live on the islands. Over 2,000 Japanese do the same. However, only two people, a married Korean couple, are living there permanently. 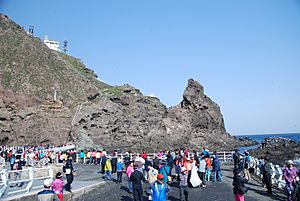 Because they are classified as a nature reserve, special permits are required for tourists to land on the islets rather than just circling them. There were 1,507 and 1,597 recorded tourists in 2003 and 2004 respectively. Visitors generally come by boat from Ulleung-do.

In 2005, the first wedding ceremony was held on the islets. The South Korean couple chose the location to protest against Japanese territorial claims. 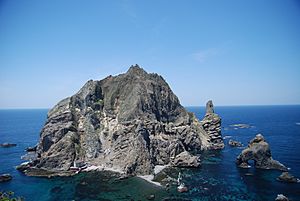 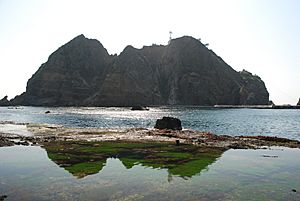 Liancourt Rocks can have harsh weather conditions. This is because of its location, and small size. Sometimes, ships are unable to dock because of strong northwestern winds in winter. The climate is warm and humid. It is heavily influenced by warm sea currents. There is a lot of rain throughout the year (annual average - 1324 mm), with occasional snowfall. Fog is a common sight. In the summer, southerly winds dominate. The water around the islets is about 10 degrees Celsius in spring, when the water is coolest. It warms to about 25 degrees Celsius in August. 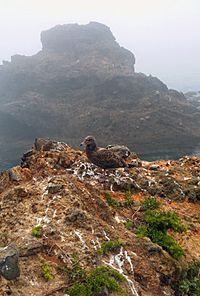 A seagull rests on the rocks of Dokdo. The weather is foggy and humid, and the part of the island in the background is obscured by the thick sea fog.

Like Ulleung-do, the islets are volcanic rocks, with only a thin layer of soil and moss. About 80 species of plants, over 22 species of birds, and 37 species of insects have been recorded on the islets, in addition to the local maritime life.

Since the early 1970s, trees and some types of flowers were planted along with the indigenous flora and fauna. (Trees are required under international law for the islets to be recognized as natural islands rather than reefs.)

Liancourt Rocks was declared "Natural Monument #336" by South Korea in the 1990s. Some birds actually live on the islands, but most are just using them as a stopover to fly elsewhere. The fork-tailed petrel, streaked shearwater, and black-tailed gulls live on the islands. The population of breeding birds counted on the rocks, however, has been declining in recent years.

In 1999, the islets were designated a special environmental protected area by the South Korean government. They are older than any other Korean volcanic islands, including Ulleung-do. 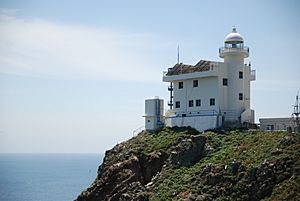 The islets are of importance not only for economic reasons, but also for military ones. They have occasionally served as a military base, most notably during the Russo-Japanese War. The South Korean government has built a radar station and helicopter landing pad on the islets, enabling it to track foreign naval forces.

Additional note of the dispute

South Korean armed force captured 3929 and killed 44 Japanese people between 1952 and 1965 until Syngman Rhee Line was set. The dispute between South Korea and Japan over the islands has gained heat in 2008 with new Japanese school books mentioning the islands, and a visit by the South Korean Prime Minister in July. Ten years ago, no people lived on the islands. But South Korea started to populate the island to make its claim stronger. South Korea insists that the islet was called Usan-do or Sokdo in a past and later changed its name, but there is no historical proof which shows when the name was changed.

All content from Kiddle encyclopedia articles (including the article images and facts) can be freely used under Attribution-ShareAlike license, unless stated otherwise. Cite this article:
Liancourt Rocks Facts for Kids. Kiddle Encyclopedia.