Kurt Browning, CM (born June 18, 1966) is a Canadian figure skater, choreographer and commentator. He is a four-time World Champion and Canadian national champion. 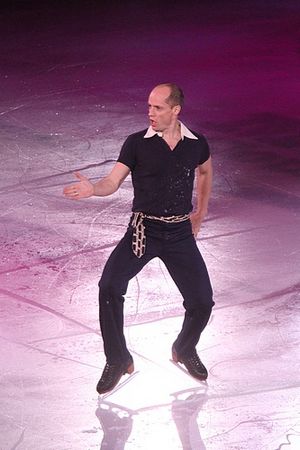 Browning was both Canadian figure skating champion and World Champion four times. He represented Canada in three Winter Olympics, 1988 (finishing 8th overall), 1992 (6th) and 1994 (5th), and earned the privilege of carrying the Canadian flag during the opening ceremonies of the 1994 games in Lillehammer, Norway. Browning's other achievements include three Canadian Professional Championships and three World Professional Championships.

On March 25, 1988, at the 1988 World Championships in Budapest, Hungary, Browning landed the first quadruple jump (four turns) in the competition. This accomplishment is listed in the Guinness Book of Records. Browning is also known for his intricate, fast, often lighthearted footwork.

During his career, Browning had a long rivalry with Brian Boitano. At the 2006 Ice Wars competition, Browning narrowly defeated Boitano.

One of Browning's iconic programs is "Singin' in the Rain", where he copies Gene Kelly's dancing in the film. Choreographed by Sandra Bezic and debuted in a CBC-TV special in 1994, this program is still asked to be performed at ice shows after 20 years.

As a commentator, Browning has made frequent appearances since turning professional in 1994. He has been a regular colour commentator for the CBC at major skating events since 2006. 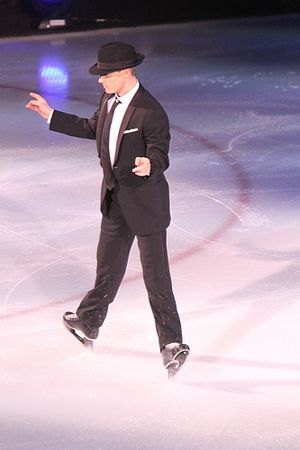 Browning appeared in the 2006 Fox television program Skating with Celebrities. Starting in 2009, he was the co-host of Battle of the Blades.

As a professional, he has skated for Stars on Ice and Tom Collins Tour of Champions, won several professional championships, and did some T.V. skating specials. He has also talked during skating events on T.V.

Browning was born in Rocky Mountain House, Alberta. He was raised in Caroline, Alberta.

He married Sonia Rodriguez, a principal dancer with the National Ballet of Canada 1996, they have two sons.

He has helped the charity Muscular Dystrophy.

All content from Kiddle encyclopedia articles (including the article images and facts) can be freely used under Attribution-ShareAlike license, unless stated otherwise. Cite this article:
Kurt Browning Facts for Kids. Kiddle Encyclopedia.