Jamie Rae Salé (born near Edmonton, Alberta, April 21, 1977) is a Canadian pair skater. she and David Pelletier won a gold medal in the 2002 Winter Olympics. The gold medal, however, was shared by a Russian pair skating couple after a figure skating scandal hit through the Olympics.

Salé was born in Calgary, Alberta. She competed first as a singles skater, winning the novice bronze medal and placing 8th in junior ladies at the Canadian Championships..

In 1994, Salé won the short program and finished with the bronze medal in the junior event at the Canadian Championships. That same year, she achieved her biggest success to date by winning the senior bronze medal with her pairs partner, Jason Turner. They were named to the 1994 Canadian Olympic team and placed 12th at the Lillehammer Olympics. They placed 16th at the 1994 World Championships in Chiba, Japan, but ended their partnership that August.

Salé had a tryout with David Pelletier in the summer of 1996, but it did not lead to a partnership. After her moderate success in singles, she decided to give pairs one last shot. The coach who was helping Pelletier find a partner, suggested Salé, he and Pelletier went to Edmonton in February 1998 to try out with Salé again. "The first time we grabbed hands, it was just great," said Pelletier, and by the next month Salé had moved to Montréal to skate with Pelletier. 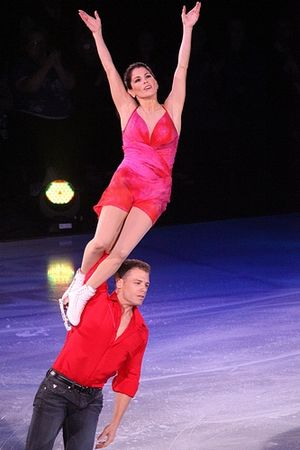 Jamie Salé and David Pelletier in 2010

Salé and Pelletier were engaged on Christmas Day of 2004 at their Edmonton, Alberta home. They married on December 30, 2005 at the Fairmont Banff Springs hotel in Alberta. They have one son together.

On June 4, 2010, it was reported that Salé and Pelletier would divorce; however, they will remain skating partners. In 2012 Salé married her Battle of the Blades partner, Craig Simpson.

All content from Kiddle encyclopedia articles (including the article images and facts) can be freely used under Attribution-ShareAlike license, unless stated otherwise. Cite this article:
Jamie Salé Facts for Kids. Kiddle Encyclopedia.