North York is one of the six administrative districts of Toronto, Ontario, Canada. It is located directly north of York, Old Toronto and East York, between Etobicoke to the west and Scarborough to the east. As of the 2016 Census, it had a population of 869,401.

North York was created as a township in 1922 out of the northern part of the former township of York, a municipality that was located along the western border of Old Toronto. Following its inclusion in Metropolitan Toronto in 1953, it was one of the fastest-growing parts of the region due to its proximity to Old Toronto. It was declared a borough in 1967, and later became a city in 1979, attracting high-density residences, rapid transit, and a number of corporate headquarters in North York City Centre, its central business district. In 1998, North York was amalgamated with the rest of Metropolitan Toronto to form the new city of Toronto and has since been a secondary economic hub of the city outside Downtown Toronto.

The Township of North York was formed on June 13, 1922 out of the rural part of the Township of York. The rapidly growing parts of the township remained in that township. As North York became more populous, it became the Borough of North York in 1967, and then on February 14, 1979, the City of North York. To commemorate receiving its city charter on St. Valentine's Day, the city's corporate slogan was "The City with Heart". It now forms the largest part of the area served by the "North York Community Council", a committee of Toronto City Council.

North York used to be known as a regional agricultural hub composed of scattered villages. The area boomed following World War II, and by the 1950s and 1960s, it resembled many other sprawling North American suburbs.

On August 10, 2008, a massive explosion occurred at the Sunrise Propane Industrial Gases propane facility just southwest of the Toronto-Downsview Airport. This destroyed the depot and damaged several homes nearby. About 13,000 residents were evacuated for several days before being allowed back home. One employee at the company was killed in the blast and one firefighter died while attending to the scene of the accident. A follow-up investigation to the incident made several recommendations concerning propane supply depots. It asked for a review of setback distances between depots and nearby residential areas but didn't call for restrictions on where they can be located.

North York residents are highly multicultural. In 2006, 57% of North York's residents were not born in Canada, and 52% were classified as belonging to a visible minority:

Chinese cultural groups dominate the eastern half of North York making up 22% of the population from Yonge Street to Victoria Park Avenue. Nearly 30% of the residents in the Willowdale electoral district are of Chinese descent, and the neighbourhood with the largest percentage of Chinese Canadians in North York is the Aspenwood area in Hillcrest Village with 57%.

Black Canadians dominate the western half of North York making up 19% of the population past Allen Road. Most of North York's Black community is along Jane Street and areas around it. Smaller areas such as Jane and Finch, Lawrence Heights, and Trethewey had more than 40% of its population identified as Black. Most are from the Caribbean but there is also a large west African population. The Jane & Wilson neighbourhood has the largest Ghanaian community in Toronto. The neighbourhood with the largest percentage of Caribbean/west African people in North York is the Black Creek area in Amesbury with 45%.

West Asians and Arabs concentrate in the eastern half of North York. Iranians have a distinctive presence on the north end of Yonge Street. There is also a large percentage of Middle Easterners along Don Mills Road. The neighbourhoods with the largest percentage of Middle Eastern people in North York are Graydon Hall and the Shaughnessy area in Don Valley Village with 17%.

Filipinos are centred on Bathurst Street making up 10% of the population of the neighbourhoods along Bathurst in North York. The Bathurst & Wilson area will soon officially be the first Little Philippines in Canada. Flemingdon Park also has a sizable Filipino community. The neighbourhood with the largest percentage of Filipino people in North York is the Neptune area in Lawrence Manor with 24%.

Although non-visible minorities are slowly declining over the years moving into the suburbs, Europeans still show a significant presence. The largest European community in North York are Italians. Most live in the houses in the western half of North York from Bathurst Street to Weston Road. Jewish Canadians are centred on Bathurst Street, which has the largest Jewish community in Toronto. Russians make up a large percentage of the population along the northern end of Bathurst Street between Sheppard Avenue and Steeles Avenue. The area is also the largest Russian community in Toronto, and is sometimes referred to as "Little Moscow". Old generation Canadians dominate the southern end of North York from Bathurst Street to the west, Leslie Street to the east, Highway 401 to the north and Lawrence Avenue to the south. The largest percentage of non-visible minorities in North York is Old Orchard in Ledbury Park with 92%.

An aircraft manufacturing facility and a former military base are located at Downsview. With the end of the Cold War, much of the land was transformed into a large park now called Parc Downsview Park. Also located in the former airfield is Toronto Aerospace Museum.

Black Creek Pioneer Village, an authentic nineteenth-century village, and the Ontario Science Centre, which has over 800 science-oriented exhibits, are North York's primary attractions. Not far from Black Creek Pioneer Village is York University's main campus, and the Jane and Finch neighbourhood. The Aga Khan Museum, located in Wynford Drive neighbourhood, includes a collection of Islamic art from the Middle-East and Northern Africa. Along Bathurst Street in North York is one of the world's largest urban Jewish communities, with a significant population of Holocaust survivors. 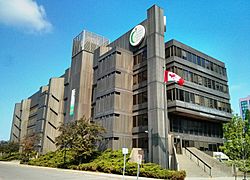 TDSB Education Centre, the headquarters of the Toronto District School Board.

North York Civic Centre was the home of North York City Council and now used by the City of Toronto for community council use and other city departments servicing North York. 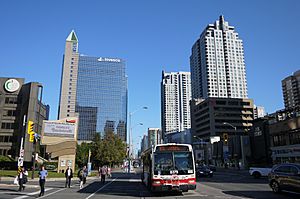 North York City Centre is the central business district of North York and is located on Yonge Street, between Finch and Sheppard Avenue.

Flemingdon Park, located near Eglinton and Don Mills, is an economic hub located near the busy Don Valley Parkway and busy Toronto Transit Commission (TTC) routes. McDonald's Canada and Celestica are located in this area, and Foresters Insurance has a major office tower and Bell Canada has a data centre. The Concorde Corporate Centre has 550,000 sq ft (51,000 m2) of leasable area and is 85% occupied with tenants such as Home Depot Canada, Sport Alliance of Ontario, Toronto-Dominion Bank, Esri Canada and Deloitte. Home Depot's Canadian head office is located in Flemingdon Park. 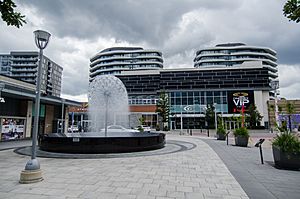 Shops at Don Mills is one of five major shopping malls in North York. 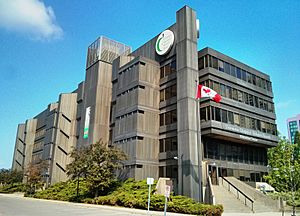 Several major controlled-access highways pass through North York, including Highway 400, Highway 401, Highway 404, Allen Road, and the Don Valley Parkway. The former three controlled access highways are operated by the province as 400-series highways, whereas the latter two roadways are managed by the City of Toronto. The section of Highway 401 which traverses North York is the busiest section of freeway in North America, exceeding 400,000 vehicles per day, and one of the widest. 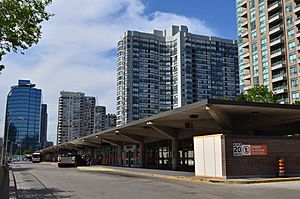 Public transportation in Toronto is primarily provided by the Toronto Transit Commission's (TTC) bus or subway system. Two lines of the Toronto subway have stations in North York, the Line 1 Yonge–University, and Line 4 Sheppard. Finch station, the terminus of the Yonge Street branch of the Yonge–University line, is the busiest TTC bus station and the sixth-busiest subway station, serving around 97,460 people per day. The Line 4 Sheppard subway which runs from its intersection with the Yonge-University line at Sheppard Avenue easterly to Fairview Mall at Don Mills Road, is entirely in North York, averaging around 55,000 riders per day. Line 5 Eglinton is a light rail line that is under construction and will traverse through the southeast portion of North York. Line 6 Finch West is another line under construction and will traverse through the northwestern portion of North York. The Ontario Line is expected to have two stops in North York, Science Centre and Flemingdon Park. The intersection of York Mills and Yonge, located next to York Mills station is home to an office and a TTC commuter parking lot, which was sold for $25 million. A $300-million project is expected to create about 300 jobs and bring a new hotel, perhaps a four star Marriott, to the intersection.

All content from Kiddle encyclopedia articles (including the article images and facts) can be freely used under Attribution-ShareAlike license, unless stated otherwise. Cite this article:
North York Facts for Kids. Kiddle Encyclopedia.