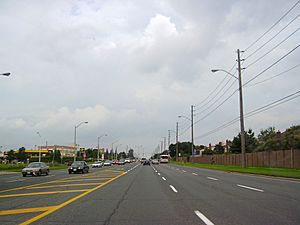 Steeles Avenue, near its joining with Warden Avenue. 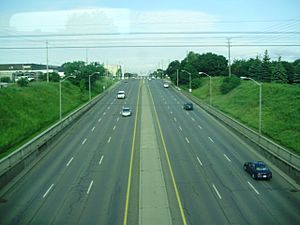 Steeles Avenue West, viewed from the railway bridge which crosses above the road.

Steeles Avenue is an east-west street that forms the northern city border of Toronto and the southern border of York Region, Ontario, Canada. It is 38.75 km within Toronto, between Albion Road and the Scarborough-Pickering border.

West of Albion Road, Steeles continues into Peel Region, where it is also known as Peel Regional Road 15. It runs through Brampton and into the Halton Region town of Milton. It stops at Appleby Line on top of the Niagara Escarpment due to the Crawford Lake Conservation Area being there, and then the road starts again just east of Guelph Line and goes until the Milborough Townline on the border of Milton and Hamilton. East of the Toronto-Pickering border, it becomes Taunton Road.

Steeles is named after J. C. Steele, who owned a tavern on the street where it joins with Yonge Street.

Landmarks and notable sites along Steeles from west to east

All content from Kiddle encyclopedia articles (including the article images and facts) can be freely used under Attribution-ShareAlike license, unless stated otherwise. Cite this article:
Steeles Avenue Facts for Kids. Kiddle Encyclopedia.