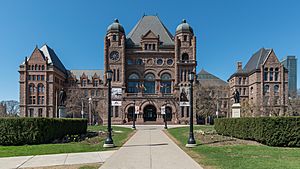 The Assembly was created in 1867 by the British North America Act. The Assembly is unicameral, meaning there is no upper house. There are 124 members of the assembly, who are called Members of Provincial Parliament (MPPs). Each member is elected from one electoral district. The party with the most members gets to choose the Premier of Ontario, who leads the government, and the Executive Council of Ontario, which is the cabinet. The leader of the second largest party in the assembly becomes the Leader of the Opposition.

The current assembly was elected in the 2018 Ontario general election. The members that were elected are part of the 42nd Parliament of Ontario.

The following table shows how many seats each political party has in the legislature. Some seats changed after the election. Three Progressive Conservative MPPs left the PCs and became independent politicians. They were Jim Wilson, Amanda Simard, and Randy Hillier.

All content from Kiddle encyclopedia articles (including the article images and facts) can be freely used under Attribution-ShareAlike license, unless stated otherwise. Cite this article:
Legislative Assembly of Ontario Facts for Kids. Kiddle Encyclopedia.