The Aga Khan Museum (French: Musée Aga Khan) is a museum of Islamic art, Iranian (Persian) art and Muslim culture located at 77 Wynford Drive in the North York district of Toronto, Ontario, Canada. The first museum in the western world dedicated to Islamic art and objects, it houses more than 1,000 rare objects including artifacts from the private collections of His Highness the Aga Khan, the Institute of Ismaili Studies in London, and Prince and Princess Sadruddin Aga Khan. As an initiative of the Aga Khan Trust for Culture, an agency of the Aga Khan Development Network, the museum is dedicated to presenting an overview of the artistic, intellectual, and scientific contributions that Muslim civilizations have made to world heritage. The Museum’s mission is to foster a greater understanding and appreciation of the contribution that Muslim civilizations have made to world heritage. Through education, research, and collaboration, the Museum will foster dialogue and promote tolerance and mutual understanding among people. In addition to the Permanent Collection, the Aga Khan Museum features several temporary exhibitions each year that respond to current scholarship, emerging themes, and new artistic developments. The Museum Collection and exhibitions are complemented by educational programs and performing arts events. 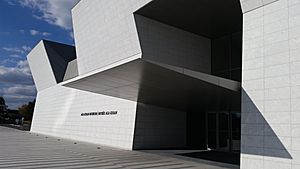 Entrance to the museum in September 2014, several days after its opening.

The Aga Khan Museum was open to the public on September 18, 2014. Henry Kim served as the museum's first Director and CEO since 2012. Prince Amyn Aga Khan was appointed the new Chairman of the Board effective May 18, 2016. The role was previously held by his brother, the Aga Khan, who still maintains a close connection to the museum as the sole Member of the Organization.

In 2016, RGD InHouse Design presented the Award of Distinction to the Aga Khan Museum for the exhibition Home Ground: Contemporary Art from the Barjeel Art Foundation (July 25, 2015 - January 3, 2016).

The Director of Collections and Public Programs, Dr. Ulrike Al-Khamis began her appointment on September 1, 2017. In 2017, the Aga Khan Museum Shop also launched an online shopping platform. Most items online and onsite were commissioned exclusively for the Aga Khan Museum. In many instances, the items — jewellery, books, clothing, artwork, and more — are connected to the Aga Khan Museum’s temporary exhibitions as well as its Permanent Collection.

The Aga Khan Museum was recognized as one of the best museums in Toronto by Conde Nast Traveler in 2018. In the same year, the Aga Khan Museum’s exhibition, The World of the Fatimids, received a Global Fine Art Award in the Ancient Art (BC – 1200) category, and an honourable mention in the Global Humanity category for the 2017 exhibition, Skate Girls of Kabul. In June 2018, Sri Lankan-born chef Shen Ousmand launched a new menu at the Aga Khan Museum’s restaurant Diwan. The McEwan Group, led by Chef Mark McEwan, has been at the helm of the Museum’s food services since 2016.

In 2022, Line 5 Eglinton, a new line that is part of the Toronto subway system will open an Aga Khan Park & Museum stop. 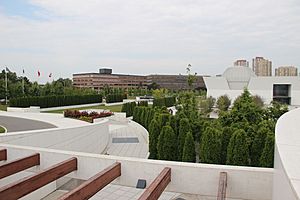 The museum is surrounded by a landscaped park, serving as a interpretation of a Charbaag.

Designed by Pritzker Prize-winning architect Fumihiko Maki, the Aga Khan Museum shares a 6.8-hectare (17-acre) site with Toronto’s Ismaili Centre, which was designed by Indian architect Charles Correa. The surrounding landscaped park was created by landscape architect Vladimir Djurovic and is a contemporary interpretation of the Islamic courtyard—the Charbaag.

The Museum is home to galleries, exhibition spaces, classrooms, a reference library, auditorium and restaurant. It houses a permanent collection of over 1,000 objects including rare masterpieces of broad range of artistic styles and materials representing more than ten centuries of human history and geographic area.

Commissioned by the Aga Khan, the museum building and the spaces around were designed to be seen as a celebration and mysteries of light. The rectilinear building is oriented forty-five degrees to solar north where all its sides are exposed to the sun. The form has been chiseled to create a concaved angular profile that is also a natural expression of the two level building. Clad in sandblasted white Brazilian granite, the surfaces of the building are set in motion in a constant interplay with the sun in light and deep shadows. The effect is similar to a sundial. 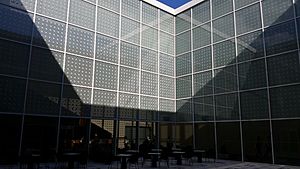 The interior courtyard of the museum is surrounded by glass walls imprinted with a pattern reminiscent of traditional Islamic Jali screens.

Within the building, there’s a fully glazed courtyard intended as a permanent peaceful sanctuary. The courtyard’s glass walls are imprinted with a double-layered pattern that creates a three dimensional effect recalling the traditional Islamic Jali screens. The light from the courtyard moves patterned shadows on the soffits, walls and floor of the grand cloister. Up above on the second level, four large openings overlook the public spaces through a cast zinc screen in the form of a contemporary Musharabiya, an Islamic bay window. Within the galleries, large aluminum paneled skylights perforated with small hexagonal openings emit soft natural light into the exhibition areas. 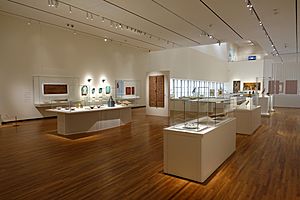 Works from the museum's collection are displayed in exhibits throughout the museum.

The Aga Khan Museum is dedicated to the acquisition, preservation, display and interpretation of artifacts relating to the intellectual, cultural, artistic and religious traditions of Muslim communities, past and present. Artifacts include ceramics, metalwork, and paintings covering all periods of Islamic history. Manuscripts in the collection include the earliest known copy of Avicenna's Qanun fi'l-Tibb ("The Canon of Medicine") dated 1052.

The museum will become a repository of historical materials related to the Ismaili community and house research programs related to each one of the aspects of its institutional mission. It will also provide a space for permanent exchanges between the Islamic and the Western worlds on educational, cultural and socio-economic issues.

The collection, which comprises some 1,000 objects, includes several superb examples of Qur'an manuscripts that demonstrate the variety of script, media and decorative styles that evolved in the Muslim world. Among them, an eighth century North African folio demonstrates the earliest style of Kufic script written on parchment. A page from the well known Blue Qur'an provides an example of gold kufic script on indigo-dyed parchment. The Blue Qur'an is considered one of the most extraordinary Qur'an manuscripts ever created; its origins are 9th-tenth century North African, and it was likely created for the Fatimid caliphs ruling from Qayrawan.

Located on the main floor of the museum, the Bellerive Room displays a selection from the ceramics collection of the late Prince Sadruddin Aga Khan and Princess Catherine Aga Khan. The room is a recreation of the “La Chambre Persane,” or “Persian Salon,” in their home, Château de Bellerive in Geneva, Switzerland, where part of the collection was originally on display. There are approximately 60 ceramic objects on view in the Bellerive room. They date from the early Islamic periods through to the 17th century. Their styles reflect the innovative technological and aesthetic contributions of Islamic potters through the ages, which were often in dialogue with influences from as far afield as China and Europe.

The exhibition titled 'Don't Ask Me Where I'm From' is in partnership with Fondazione Imago Mundi. The project channels the experiences of artists who are first, second, and third-generation immigrants–a growing body of people raised in a culture other than their parents–in a series of several works exploring cross-cultural artistic realities.

The exhibition titled 'Sanctuary' showcases immigrants' experience using rugs as a medium to share narratives to demonstrate stories, histories, place, and purpose. The exhibition comprises the work of thirty-six artists from twenty-two countries creating rug designs. The designs were woven into the rugs by artisans in Lahore, using traditional techniques to create each piece of art. Artists of this exhibition include Ai Wei Wei.

All content from Kiddle encyclopedia articles (including the article images and facts) can be freely used under Attribution-ShareAlike license, unless stated otherwise. Cite this article:
Aga Khan Museum Facts for Kids. Kiddle Encyclopedia.