Parma is a city in the northern Italian region of Emilia-Romagna famous for its architecture, music, art, prosciutto (ham), cheese and surrounding countryside. It is home to the University of Parma, one of the oldest universities in the world. Parma is divided into two parts by the stream of the same name. The district on the far side of the river is Oltretorrente. Parma's Etruscan name was adapted by Romans to describe the round shield called Parma.

The Italian poet Attilio Bertolucci (born in a hamlet in the countryside) wrote: "As a capital city it had to have a river. As a little capital it received a stream, which is often dry".

Parma was already a built-up area in the Bronze Age. In the current position of the city rose a terramare. The "terramare" (marl earth) were ancient villages built of wood on piles according to a defined scheme and squared form; constructed on dry land and generally in proximity to the rivers. During this age (between 1500 BC and 800 BC) the first necropolis (on the sites of the present-day Piazza Duomo and Piazzale della Macina) were constructed.

The city was most probably founded and named by the Etruscans, for a parma or palma (circular shield) was a Latin borrowing, as were many Roman terms for particular arms, and the names Parmeal, Parmni and Parmnial appear in Etruscan inscriptions. Diodorus Siculus reported that the Romans had changed their rectangular shields for round ones, imitating the Etruscans. Whether the Etruscan encampment acquired its name from its round shape, like a shield, or from its metaphorical function as a shield against the Gauls to the north, remains uncertain.

The Roman colony was founded in 183 BC, together with Mutina (Modena); 2,000 families were settled. Parma had a certain importance as a road hub over the Via Aemilia and the Via Claudia. It had a forum, in what is today the central Garibaldi Square. In 44 BC the city was destroyed; subsequently Augustus rebuilt it. During the Roman Empire, it gained the title of Julia for its loyalty to the imperial house.

Attila sacked the city in 452, and the Germanic king Odoacer later gifted it to his followers. During the Gothic War, however, Totila destroyed it. It was then part of the Byzantine Exarchate of Ravenna (changing its name to Chrysopolis, "Golden City", probably due to the presence of the imperial treasury) and, from 569, of the Lombard Kingdom of Italy. During the Middle Ages, Parma became an important stage of the Via Francigena, the main road connecting Rome to Northern Europe; several castles, hospitals and inns were built in the following centuries to host the increasing number of pilgrims who passed by Parma and Fidenza, following the Apennines via Collecchio, Berceto and the Corchia ranges before descending the Passo della Cisa into Tuscany, heading finally south toward Rome.

The city had a medieval Jewish community. The Palatine Library houses the largest collection of Hebrew manuscripts in Italy, and the second-largest in the world after the Bodleian Library in Oxford 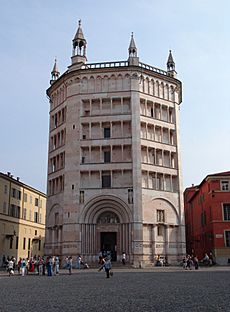 Under Frankish rule, Parma became the capital of a county (774). Like most northern Italian cities, it was nominally a part of the Holy Roman Empire created by Charlemagne, but locally ruled by its bishops, the first being Guibodus. In the subsequent struggles between the Papacy and the Empire, Parma was usually a member of the Imperial party. Two of its bishops became antipopes: Càdalo, founder of the cathedral, as Honorius II; and Guibert, as Clement III. An almost independent commune was created around 1140; a treaty between Parma and Piacenza of 1149 is the earliest document of a comune headed by consuls. After the Peace of Constance (1183) confirmed the Italian communes' rights of self-governance, long-standing quarrels with the neighbouring communes of Reggio Emilia, Piacenza and Cremona became harsher, with the aim of controlling the vital trading line over the Po River.

The struggle between Guelphs and Ghibellines was a feature of Parma too. In 1213, her podestà was the Guelph Rambertino Buvalelli. Then, after a long stance alongside the emperors, the Papist families of the city gained control in 1248. The city was besieged in 1247–48 by Emperor Frederick II, who was however crushed in the battle that ensued. 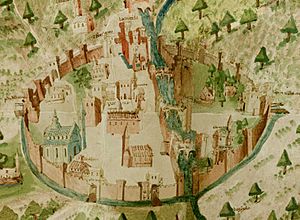 Parma in the 15th century

Parma fell under the control of Milan in 1341. After a short-lived period of independence under the Terzi family (1404–1409), the Sforza imposed their rule (1440–1449) through their associated families of Pallavicino, Rossi, Sanvitale and Da Correggio. These created a kind of new feudalism, building towers and castles throughout the city and the land. These fiefs evolved into truly independent states: the Landi governed the higher Taro's valley from 1257 to 1682. The Pallavicino seignory extended over the eastern part of today's province, with the capital in Busseto. Parma's territories were an exception for Northern Italy, as its feudal subdivision frequently continued until more recent years. For example, Solignano was a Pallavicino family possession until 1805, and San Secondo belonged to the Rossi well into the 19th century.

View of Palazzo della Pilotta in the Piazza della Pace. The rebuilt part on the right is where once was the church of St.Peter. The large hole was caused by an Allies bombing.

Between the 14th and the 15th centuries, Parma was at the centre of the Italian Wars. The Battle of Fornovo was fought in its territory. The French held the city in 1500–1521, with a short Papal parenthesis in 1512–1515. After the foreigners were expelled, Parma belonged to the Papal States until 1545.

In that year the Farnese pope, Paul III, detached Parma and Piacenza from the Papal States and gave them as a duchy to his illegitimate son, Pier Luigi Farnese, whose descendants ruled in Parma until 1731, when Antonio Farnese, last male of the Farnese line, died. In 1594 a constitution was promulgated, the University enhanced and the Nobles' College founded. The war to reduce the barons' power continued for several years: in 1612 Barbara Sanseverino was executed in the central square of Parma, together with six other nobles charged of plotting against the duke. At the end of the 17th century, after the defeat of Pallavicini (1588) and Landi (1682) the Farnese duke could finally hold with firm hand all Parmense territories. The castle of the Sanseverino in Colorno was turned into a luxurious summer palace by Ferdinando Bibiena.

In the Treaty of London (1718) it was promulgated that the heir to the combined Duchy of Parma and Piacenza would be Elisabeth Farnese's elder son with Philip V of Spain, Don Carlos. In 1731, the fifteen-year-old Don Carlos became Charles I Duke of Parma and Piacenza, at the death of his childless great uncle Antonio Farnese. In 1734, Charles I conquered the kingdoms of Naples and Sicily, and was crowned as the King of Naples and Sicily on 3 July 1735, leaving the Duchy of Parma to his brother Philip (Filippo I di Borbone-Parma). All the outstanding art collections of the duke's palaces of Parma, Colorno and Sala Baganza were moved to Naples.

Parma was under French influence after the Peace of Aachen (1748). Parma became a modern state with the energetic action of prime minister Guillaume du Tillot. He created the bases for a modern industry and fought strenuously against the church's privileges. The city lived a period of particular splendour: the Biblioteca Palatina (Palatine Library), the Archaeological Museum, the Picture Gallery and the Botanical Garden were founded, together with the Royal Printing Works directed by Giambattista Bodoni, aided by the Amoretti Brothers as skilled and inspired punchcutters. 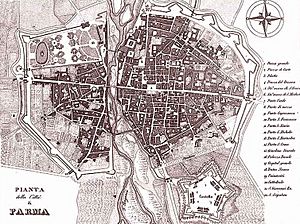 During the Napoleonic Wars (1802–1814), Parma was annexed to France and made capital of the Taro Department. Under its French name Parme, it was also created a duché grand-fief de l'Empire for Charles-François Lebrun, duc de Plaisance, the Emperor's Arch-Treasurer, on 24 April 1808 (extinguished 1926).

After the restoration of the Duchy of Parma by the 1814–15 Vienna Congress, the Risorgimento's upheavals had no fertile ground in the tranquil duchy. In 1847, after Marie Louise, Duchess of Parma's death, it passed again to the House of Bourbon, the last of whom was stabbed in the city and left it to his widow, Luisa Maria of Berry. On 15 September 1859 the dynasty was declared deposed, and Parma entered the newly formed province of Emilia under Luigi Carlo Farini. With the plebiscite of 1860 the former duchy became part of the unified Kingdom of Italy.

The loss of the capital role provoked an economic and social crisis in Parma. It started to recover its role of industrial prominence after the railway connection with Piacenza and Bologna of 1859, and with Fornovo and Suzzara in 1883. Trade unions were strong in the city, in which a famous General Strike was declared from 1 May to 6 June 1908. The struggle with Fascism had its most dramatic moment in the August 1922, when the regime officer Italo Balbo attempted to enter the popular quarter of Oltretorrente. The citizens organized into the Arditi del Popolo ("People's champions") and pushed back the squadristi. This episode is considered the first example of Resistance in Italy.

During World War II, Parma was a strong centre of partisan resistance. The train station and marshalling yards were targets for high altitude bombing by the Allies in the spring of 1944. Much of the Palazzo della Pilotta — situated not far (half a mile) from the train station — was destroyed. Along with it also Teatro Farnese and part of Biblioteca Palatina were destroyed by Allied bombs. Several other monuments were also damaged: Palazzo del Giardino, Steccata and San Giovanni churches, Palazzo Ducale, Paganini theater and the monument to Verdi. However Parma did not see widespread destruction during the war. Parma was liberated from the German occupation (1943–1945) on 26 April 1945 by the partisan resistance and the Brazilian Expeditionary Force.

The following data comes from the weather station located at the University in the city center. It is affected by the urban heat island phenomenon. Parma has a four-season humid subtropical climate with heavy continental influences due to the city's inland position. Relatively nearby coastal areas like Genoa have far milder climates with cooler summers and milder winters, with the mountains separating Parma from the mediterranean acting as a barrier to the sea air. 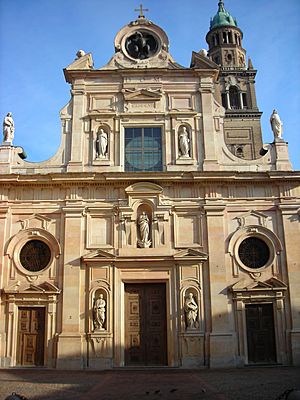 Late Mannerist façade of the church of San Giovanni Evangelista, by Simone Moschino (1604), with sculpture by Giambattista Carra da Bissone 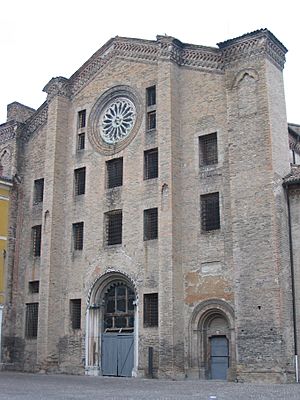 Façade of the church of San Francesco. It was the city's jail.

=* The Teatro Farnese was constructed in 1618–1619 by Giovan Battista Aleotti, totally in wood. It was commissioned by Duke Ranuccio I for the visit of Cosimo I de' Medici. 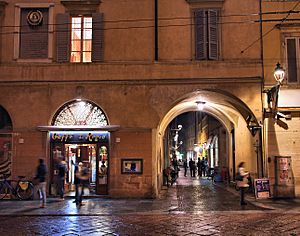 Caffè Teatro Regio in front of the theatre

In 2004 Parma was appointed the seat of the European Food Safety Authority (EFSA) and was appointed to the Creative Cities Network as UNESCO City of Gastronomy. Parma also has two food multinationals, Barilla and Parmalat and a medium-large food tourism sector represented by Parma Golosa and Food Valley companies. 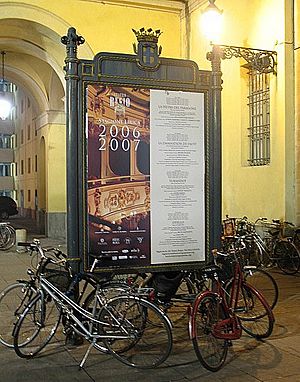 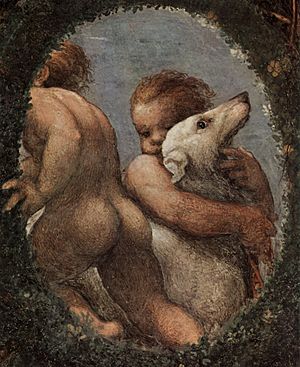 Detail of Correggio's frescoes in the Camera di San Paolo. 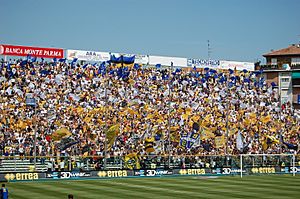 Parma F.C. fans at the Stadio Ennio Tardini, one of the oldest stadiums in Italy.

Parma's other sport team is the rugby union club Zebre which competes in Pro14, one of the top rugby competitions in the world. Parma also is home to two rugby union teams in the top national division, Overmach Rugby Parma and SKG Gran Rugby.

Pallavolo Parma and Parma Baseball are also popular teams in the city.

Parma railway station is on the Milan–Bologna railway.

The Parma trolleybus system has been in operation since 1953. It replaced an earlier tramway network, and presently comprises four trolleybus routes.

Parma is twinned with:

All content from Kiddle encyclopedia articles (including the article images and facts) can be freely used under Attribution-ShareAlike license, unless stated otherwise. Cite this article:
Parma Facts for Kids. Kiddle Encyclopedia.