House of Farnese facts for kids 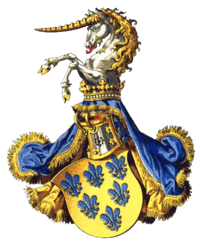 The arms of the Farnese family.

The House of Farnese was a noble family from Italy. They owned fine art collections within their many palaces throughout Rome. Two of their members became Popes. The famous Elisabetta Farnese was a member of the family and she had great political influence over her husband, Philip V of Spain. The family were also the rulers of the small Italian Duchy of Parma. The family's art collection was only rivalled by that of the Medici.

All content from Kiddle encyclopedia articles (including the article images and facts) can be freely used under Attribution-ShareAlike license, unless stated otherwise. Cite this article:
House of Farnese Facts for Kids. Kiddle Encyclopedia.