The Christina River is a tributary of the Delaware River, approximately 35 miles (56 km) long, in northern Delaware in the United States, also flowing through small areas of southeastern Pennsylvania and northeastern Maryland. Near its mouth the river flows past downtown Wilmington, Delaware, forming the city's harbor for traffic on the Delaware River. The Port of Wilmington, opened in 1923 at the river's mouth, handles international cargo and trade.

The river rises in southeastern Pennsylvania, in Franklin Township in southern Chester County, and initially flows southeastwardly, passing through the northeastern extremity of Maryland in northeastern Cecil County, into New Castle County in Delaware, where it flows through western and southern areas of the city of Newark and then turns northeastwardly, passing the town of Newport and approaching Wilmington from the southwest. It receives White Clay Creek from the west near Newport, and Brandywine Creek in Wilmington, approximately 2 miles (3 km) upstream of its mouth. 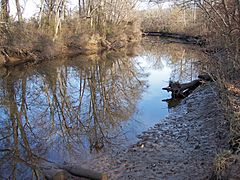 The Christina River in its upper course in 2006, near the community of Christiana

The river was named for Queen Christina of Sweden. Fort Christina, the first permanent European settlement in Delaware, was established at the confluence of Brandywine Creek and the Christina River in 1638 as a part of the Swedish colony of New Sweden. The fort was captured by the Dutch in 1655, and by the English in 1664.

The Christina River is also one of many Striped Bass spawning areas that empty into the Delaware River.

The Christina Riverwalk makes up a segment of the East Coast Greenway, a 3,000 mile long system of trails connecting Maine to Florida.

According to the Geographic Names Information System, the Christina River has also been known historically as:

All content from Kiddle encyclopedia articles (including the article images and facts) can be freely used under Attribution-ShareAlike license, unless stated otherwise. Cite this article:
Christina River Facts for Kids. Kiddle Encyclopedia.