The Port of Wilmington (formerly Wilmington Marine Terminal) is a deep-water port located at the confluence of the Christina River and the Delaware River in Wilmington, Delaware, 65 miles (105 km) from the Atlantic Ocean. The port has been ranked as the top North American port for imports of fresh fruit, bananas, and juice concentrate, and as having the largest dock-side cold storage facility. 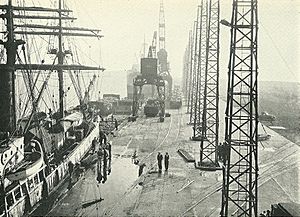 The first development of a marine terminal in Wilmington was completed in 1923 at the location of the current Port of Wilmington. A number of improvements and expansions were made to the port over the course of the following decades. In 1972, Del Monte made the port its "principal North American port-of-discharge" for bananas and pineapples. Four years later, Volkswagen of America chose the port as its hub for imports of Volkswagen, Audi, and Porsche automobiles to North America and the Port of Wilmington constructed a floating dock to receive these products. In June 1995, the state of Delaware purchased the port from the city of Wilmington and created Diamond State Port Corporation to operate the facility. In October 2007, the Port of Wilmington became the first port to implement the Transportation Worker Identification Credential.

In 2011, the Port sought to expand operations to include new construction of a berth suitable for container ships on the Delaware River.

The port has a 3,435-foot (1,047 m) wharf face along the Christina River with depths of 35–38 feet (11–12 m) alongside. There are nine berths facing the Christina River, including seven general cargo berths, one petroleum berth, one floating roll-on/roll-off (RoRo) berth. An automobile berth faces the Delaware River.

The Seamen's Center, located in the Port of Wilmington complex, provides services to visiting seamen such as entertainment, transportation, and spiritual guidance. The center is supported by the Episcopal Diocese of Delaware.

Not located at the Port, but in close proximity, is a refrigerated trailer hub which accommodates the multi-day parking of trucks with perishable cargo destined for transport out of the Port.

The Port receives approximately $2 million USD from the State of Delaware in support of operations on an annual basis.

All content from Kiddle encyclopedia articles (including the article images and facts) can be freely used under Attribution-ShareAlike license, unless stated otherwise. Cite this article:
Port of Wilmington (Delaware) Facts for Kids. Kiddle Encyclopedia.