Paoli ( pay-OH-lee) is a census-designated place in Chester County near Philadelphia, Pennsylvania, United States. It is situated in portions of two townships: Tredyffrin and Willistown. At the 2010 census, it had a total population of 5,575.

The town of Paoli grew around an inn kept in 1769 by Joshua Evans, whose father bought 500 acres (200 ha) from William Penn in 1719 near the current site of the Paoli Post Office. Evans named his inn after General Pasquale Paoli, a Corsican, after he had received the 45th and final toast at a Saint Patrick's Day celebration. The inn's location on the Philadelphia and Lancaster Turnpike, about 20 miles (one day's drive for a horse-drawn wagon) from Philadelphia, ensured its success.

On the evening of September 20, 1777, near Paoli, General Charles Grey and nearly 5,000 British soldiers launched a surprise attack on a small regiment of Patriot troops commanded by General Anthony Wayne in what becomes known as the Paoli Massacre. Not wanting to lose the element of surprise, Grey ordered his troops to empty their muskets and to use only bayonets or swords to attack the sleeping Americans under the cover of darkness.

With the help of a Loyalist spy who provided a secret password and led them to the camp, General Grey and the British launched the successful attack on the unsuspecting men of the Pennsylvania regiment, killing them. It was also alleged that the British soldiers took no prisoners during the attack. Before it was over, nearly 200 Americans were killed or wounded. The Paoli Massacre became a rallying cry for the Americans against British atrocities for the rest of the Revolutionary War. The Battle of Paoli occurred in the town; the site of the battle is now part of nearby Malvern, Pennsylvania.

The construction of the Main Line of Public Works across Pennsylvania enhanced the village's stature, as the Philadelphia and Columbia Railroad passed through it. This became the Pennsylvania Railroad, which built suburban commuter lines out from Philadelphia in the late 19th century, spurring the growth of that city's suburbs. The largest and longest of these commuter lines, the "Main Line", terminated in Paoli.

According to the United States Census Bureau, the CDP has a total area of 2.0 square miles (5.2 km2), all of which is land. Paoli borders other towns, such as Berwyn and Malvern. These three towns belong to either the Tredyffrin/Easttown or the Great Valley school districts. 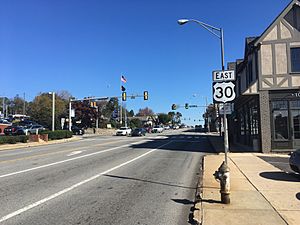 US 30 passes through Paoli along Lancaster Avenue

Paoli is served by the U.S. Route 202 freeway, U.S. Route 30 and Pennsylvania Route 252 connecting it to King of Prussia and Philadelphia. Historically, Paoli was on the Philadelphia and Lancaster Turnpike, which was later absorbed into the Lincoln Highway, and became US 30 still later. Many locals still call the route "Lancaster Pike".

For generations, Paoli was the western terminus of Pennsylvania Railroad commuter trains coming from Philadelphia on the Main Line. The "Paoli Local" became iconic in the western suburbs. Amtrak's Keystone Service and Pennsylvanian trains stop at the Paoli station, but with the decline of long-distance train travel, the stops are now less frequent. 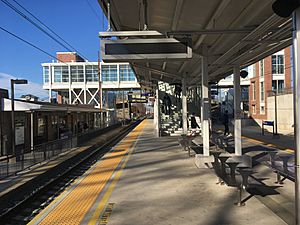 Commuters traveling by rail within Southeastern Pennsylvania use the Paoli station, although most local trains serving Paoli now terminate in Malvern, one stop to the west. SEPTA Regional Rail's Paoli/Thorndale Line (formerly R5) commuter rail runs between Thorndale and Philadelphia both ways every 30 minutes during the week. College students and city-working suburbanites take the Paoli/Thorndale Line to school and work. Station-to-station, a trip from Paoli to Center City Philadelphia on the Paoli/Thorndale Line takes approximately 45 minutes, although some rush hour trains run directly between Paoli and 30th Street Station in under 30 minutes.

Paoli is served by multiple SEPTA Suburban Bus routes. Local buses traverse Route 30 along the Main Line, and Paoli Pike is the main artery for buses heading to West Chester. The Route 92 bus connects Paoli to West Chester and the King of Prussia Transit Center at the King of Prussia mall. The Route 106 bus links Paoli to the other Main Line communities and the 69th Street Transportation Center. The Route 204 and Route 206 buses connect the Paoli station to Eagleview and the Great Valley Corporate Center respectively.

In 2016, the majority of Paoli residents were found to drive alone on their way to work, while only 7.97% took public transportation.

Delaware Valley Friends School is a school for those with learning differences in Paoli. It is adjacent to Station Square, a business complex.

The Roman Catholic Archdiocese of Philadelphia operates Catholic schools. St. Norbert School is in Easttown Township, and is outside of the Paoli CDP, but has a Paoli mailing address. The school was established in 1956, with the school building built the following year.

Notable people who were born or lived in Paoli include:

All content from Kiddle encyclopedia articles (including the article images and facts) can be freely used under Attribution-ShareAlike license, unless stated otherwise. Cite this article:
Paoli, Pennsylvania Facts for Kids. Kiddle Encyclopedia.