Battle of Paoli facts for kids

The Battle of Paoli (also known as the Battle of Paoli Tavern or the Paoli Massacre) was a battle in the Philadelphia campaign of the American Revolutionary War fought on September 20, 1777, in the area surrounding present-day Malvern, Pennsylvania. Following the American retreats at the Battle of Brandywine and the Battle of the Clouds, George Washington left a force under Brigadier General Anthony Wayne behind to monitor and harass the British as they prepared to move on the revolutionary capital of Philadelphia. On the evening of September 20, British forces under Major General Charles Grey led a surprise attack on Wayne's encampment near the Paoli Tavern. Although there were relatively few American casualties, claims were made that the British took no prisoners and granted no quarter, and the engagement became known as the "Paoli Massacre."

After the American defeat at the Battle of Brandywine, American Major General George Washington was intent on accomplishing two tasks. He wanted to protect Philadelphia from British forces under the command of Lieutenant General William Howe, and he needed to replenish the rapidly dwindling supplies and munitions stored at Samuel Van Leer's furnace in Reading, Pennsylvania. Washington withdrew across the Schuylkill River, marched through Philadelphia, and headed northwest. Since the Schuylkill was fordable only far upstream starting at Matson's Ford (present-day Conshohocken), Washington could protect both the capital and the vital supply areas to the west from behind the river barrier. Washington reconsidered and recrossed the river to face the British, who had moved little since Brandywine, because of a shortage of wagons to carry their wounded and their baggage. After the Battle of the Clouds was aborted by bad weather on September 16, Washington again withdrew across the Schuylkill, leaving Brigadier General "Mad" Anthony Wayne's Pennsylvania Division at Chester, Pennsylvania. When the British columns passed by, Wayne followed, under orders from Washington to harass the British and attempt to capture all or part of their baggage train.

Wayne assumed that his presence was undetected and camped close to the British lines in Paoli, Pennsylvania. His division consisted of the 1st, 2nd, 4th, 5th, 7th, 8th, 10th and 11th Pennsylvania Regiments, Hartley's Regiment, an attached artillery company and a small force of dragoons. All told, it was about 1,500 strong. Camped about 1 mile (1.6 km) away was William Smallwood's Maryland militia, about 2,100 relatively inexperienced troops.

The British heard rumors that Wayne was in the area, and General Howe sent out scouts who reported his location near the Paoli Tavern on September 19. Since his position was just 4 miles (6.4 km) from the British camp at Tredyffrin, Pennsylvania, Howe immediately planned an attack on Wayne's relatively exposed camp.

At 10 p.m. on September 20, British commander Major General Charles Grey marched from the British camp and launched a surprise attack on Wayne's camp, near the General Paoli Tavern, from which the battle takes its name, located near present-day Malvern. Grey's troops consisted of the 2nd Light Infantry, a composite battalion formed from the light companies of 13 regiments, plus the 42nd and 44th Foot. Altogether, his brigade comprised some 1,200 men.

To ensure that the Americans were not alerted, General Grey ordered that troops should advance with muskets unloaded and attack with the bayonet alone. In the case that loads could not be drawn from weapons, he ordered that flints should be removed instead, giving rise to the tradition this was a general order and earning the General the epithet "No Flints" Grey. In fact, Major Maitland, commanding officer 2nd Light Infantry battalion, was given permission to advance with muskets loaded, giving his personal assurance that his men could be relied on.

The British forces, led by a local blacksmith forced to act as guide, approached the camp from a wood and were able to achieve complete surprise. They stormed the camp in three waves—the 2nd Light Infantry in the lead followed by the 44th and the 42nd. Completely unprepared, Wayne's troops fled from the camp and were pursued. Near the White Horse Tavern the British encountered Smallwood's force and routed it as well.

With casualties of only 4 killed and 7 wounded, the British had routed an entire American division. Historian Thomas J. McGuire says that 53 Americans were buried on the battlefield but "whether these were all of the American dead or only those found on the campsite-battlefield is uncertain". Local tradition says that 8 more Americans killed in the battle were buried at the nearby Anglican church of St. Peter-in-the-Great Valley. 71 prisoners were taken by the British, 40 of whom were so badly wounded that they had to be left behind in nearby houses. A total of 272 men were killed, wounded or missing from Wayne's division after the battle. McGuire reports that the day after the battle, 52 dead Americans were buried (and another who was found later), 39 of the buried are un-named. The highest ranking American officer killed was Major Mareen Lamar (sometimes misspelled Marien).

An official inquiry found that Wayne was not guilty of misconduct but that he had made a tactical error. Wayne was enraged and demanded a full court-martial. On November 1, a board of 13 officers declared that Wayne had acted with honor.

The incident gained notoriety partly because of accounts by eyewitnesses, who claimed that the British had bayoneted or Americans who tried to surrender. 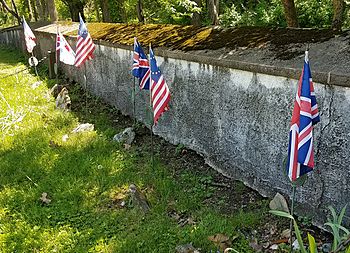 Common grave of British and American soldiers killed in the battle, churchyard of St. Peter's Church in the Great Valley.

In any case, Wayne's troops swore revenge and "Remember Paoli!" was used by them as a battle cry at Germantown and at Stony Point.

There is a tradition that, to show their defiance, the men of the 2nd Light Infantry dyed their hat feathers red so the Americans would be able to identify them. In 1833, the Light Company of the 46th Regiment of Foot were authorized to wear red cap distinctions instead of the regulation Light Infantry green, apparently in commemoration of this gesture, and in 1934, the Royal Berkshire Regiment, which carried on the traditions of the 49th Foot, were authorized to wear a red distinction in their head dress although, misleadingly, this was granted "to commemorate the role of the Light Company at the battle of Brandywine Creek". In the second half of the 20th century, the descendants of both regiments wore red backing to their cap badges and did so until 2006 when The Light Infantry and the Royal Gloucestershire, Berkshire and Wiltshire Regiment were absorbed by The Rifles.

In 1877, a granite monument was erected at the site of the battle to replace an 1817 monument that was in poor condition; the Paoli monument inscription replicates the words of the 1817 monument on one side. It stands 22.5 feet (6.9 m) tall and is inscribed on all four sides. It is located in a local park in Malvern that was listed on the National Register of Historic Places in 1997 as the Paoli Battlefield Site and Parade Grounds. There are two contributing buildings, two contributing sites, and five contributing objects included on the listing. They are the Paoli Battlefield Site, Paoli Parade Grounds, Paoli Massacre Monument (1817), Paoli Massacre obelisk (1877), World War I monument (1928), World War II urn (c. 1946), and caretaker's house and garage (1922).

All content from Kiddle encyclopedia articles (including the article images and facts) can be freely used under Attribution-ShareAlike license, unless stated otherwise. Cite this article:
Battle of Paoli Facts for Kids. Kiddle Encyclopedia.