Berwyn is a census-designated place (CDP) in Chester County, Pennsylvania, United States. The population was 3,631 at the 2010 census. The area is part of Philadelphia's Main Line suburbs.

At times, the village has been called Cocheltown, Reeseville, Glassley and Gaysville. The town received its present name in 1877 during the celebration of its centennial when one of the Welsh settlers proposed to name the village after the Berwyn Hills overlooking the Valley of the Dee River in Meirionnydd, Wales. 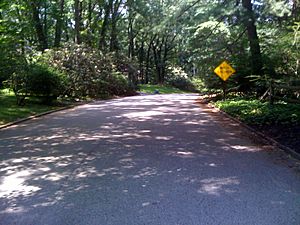 Berwyn is located within Tredyffrin and Easttown Townships. The area is part of Philadelphia's Main Line suburbs.

Points of interest are Teegarden Park and Glen Brook Farm.

All content from Kiddle encyclopedia articles (including the article images and facts) can be freely used under Attribution-ShareAlike license, unless stated otherwise. Cite this article:
Berwyn, Pennsylvania Facts for Kids. Kiddle Encyclopedia.