Born in Washington, D.C. while her father was a Congressman, Julie and her elder sister, Patricia Nixon Cox, grew up in the public eye. Her father was elected U.S. Senator from California when she was two; Vice President of the United States when she was four. Her 1968 marriage to David Eisenhower, grandson of President Dwight D. Eisenhower, was seen as a union between two of the most prominent political families in the United States.

Throughout the Nixon administration (1969 to 1974), Julie worked as Assistant Managing Editor of The Saturday Evening Post while holding the unofficial title of "First Daughter." She was widely noted as one of her father's most vocal and active defenders throughout the Nixon administration. Eisenhower was named one of the "Ten Most Admired Women in America" for four years by readers of Good Housekeeping magazine in the 1970s.

After her father resigned in disgrace from the White House in 1974, she wrote the definitive biography of her mother, the New York Times best-seller Pat Nixon: The Untold Story. She continues to engage in works that support her parents' legacies.

Julie Nixon, aged 4, here with Republican presidential nominee Dwight D. Eisenhower as she is held by her father, the soon-to-be Vice President

Julie Nixon was born while her father, Richard Nixon, was a Congressman, but much of her childhood coincided with her father's service as Dwight Eisenhower's Vice-President (1953–61). As a child, one of her favorite pets was a cocker spaniel named Checkers, who figured prominently in one of her father's most famous speeches, given during his 1952 campaign for Vice-President of the United States.

During the Vice Presidency she attended the private Sidwell Friends School in Washington along with her sister, Tricia. After her father lost his presidential bid in 1960 the family returned to California where her father ran unsuccessfully for governor in 1962. The Nixons then moved to New York and Julie attended Smith College after her graduation from the Chapin School. She received a master's degree in education from The Catholic University of America in 1971. 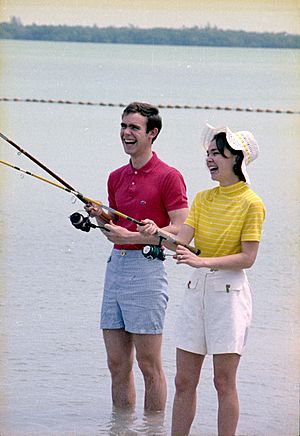 She began dating David Eisenhower in 1966 when both were freshmen at Smith College and Amherst College, respectively. She became engaged to him a year later. Both Julie and David have admitted that Mamie Eisenhower played a major part in their relationship.

On December 22, 1968, after her father was elected president but before he took office, Julie married David. They both decided they did not want the publicity of a White House wedding and were married quietly at the Marble Collegiate Church in New York City.

After her father resigned from office, the two lived in California near Julie's parents and later in the suburbs of Philadelphia. The Eisenhowers have three children: Jennie Elizabeth (born August 15, 1978), an actress, Alexander Richard (b. 1980) and Melanie Catherine Eisenhower (b. 1984).

During the United States presidential election of 1968, when her father was the Republican nominee, Julie began to feel that she was not active enough in her father's campaign. She began to take an active role in his campaign, and shook hands for hours while greeting people. Despite not liking the publicity and hating to answer "personal questions," she did anything she could to help her father. 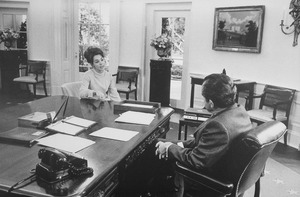 Julie with her father in the Oval Office, 1971

While her father served as President (1969–74), Julie became active at the White House as a spokesperson for children's issues, the environment, and the elderly. She gave tours to disabled children, filled in for her mother at events, and took an active interest in foreign policy.

She and Tricia were placed in charge of Caroline Kennedy and John F. Kennedy, Jr., when they visited the White House in 1971. The sisters took the young Kennedys on a tour of their former residence, which included going to their old bedrooms and to the Oval Office. 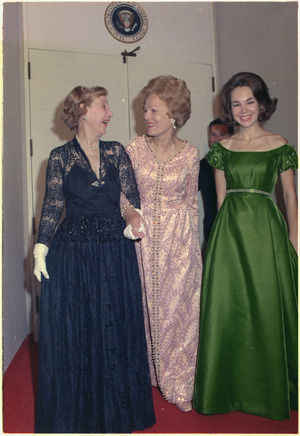 During 1973–75, she served as Assistant Managing Editor of the Saturday Evening Post and helped establish a book division for Curtis Publishing Co., its parent corporation. It was during this time that Julie wrote the book Eye On Nixon, full of photographs of her father.

After the news of the Watergate break-in and suspicions that it might reach as high as the Oval Office began to mount Julie took on the press at home and abroad. Taking on the "role of trying to explain her father to the world", Julie's public defense of her father began at Walt Disney World on May 2, 1973. She gave a total of 138 interviews across the country.

Just before noon on August 9, 1974, Julie stood behind her father while he gave his goodbye speech to the White House staff. She would later say it was the hardest moment for him.

Life after the White House 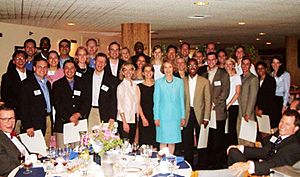 Eisenhower served as Chair of the White House Fellows program in the George W. Bush administration, pictured here with the 2003 class, Annapolis, Maryland

Julie and David settled in Berwyn, Pennsylvania, where she completed several books. She has an extensive record of community service and a special interest in at-risk youth. For over twenty years she served on the Board of Directors for Jobs for America's Graduates, a national organization that helps young people graduate from high school and transition into a first job. She was named a Distinguished Daughter of Pennsylvania for her civic contributions.

She is active with the Richard Nixon Foundation, sitting on its board. From 2002 to 2006 she was Chair of the President's Commission on White House Fellowships, a program fostering leadership in the nation's most exceptional young adults. 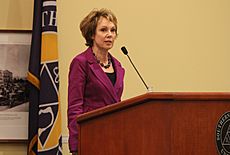 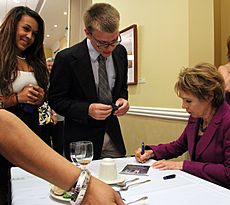 Julie Nixon Eisenhower spoke at Southern Arkansas University in September 2013 (top) and signed copies of her books for students (below).

She, along with her sister and father, was with her mother when she died of lung cancer on June 22, 1993. Four days later, on June 26, 1993, she attended her mother's funeral service on the grounds of the Richard Nixon Library in Yorba Linda. Ten months later, she was by her father's bedside with her sister when he died. Julie attended the funeral on April 27, 1994. Her father's death left her and her sister with his diary entries, binders and tapes among other things.

She has expressed her dislike in a few adaptations of presidencies, and labeled them as giving young viewers a "twisted sense of history." This extended to Oliver Stone's film Nixon, an adaptation of her father's presidency. Walt Disney's daughter, Diane Disney Miller, wrote a letter to Julie and her sister saying that Stone had "committed a grave disservice to your family, to the Presidency, and to American history".

The Nixon Library became part of the National Archives system in July 2007 due to Julie's continuous advocating.

In spite of her family's history of supporting Republicans, Julie donated $2,300 to Barack Obama in the 2008 Democratic primary race against Hillary Clinton. She supported Mitt Romney in 2012, the Republican nominee against President Obama, and Donald Trump in 2016.

On March 16, 2012, she and her sister arrived in Yorba Linda to celebrate what would have been their mother's 100th birthday. On November 23, 2013, Eisenhower and her husband opened a holiday exhibit for the Nixon Library, which remained there until January 5, 2014.

All content from Kiddle encyclopedia articles (including the article images and facts) can be freely used under Attribution-ShareAlike license, unless stated otherwise. Cite this article:
Julie Nixon Eisenhower Facts for Kids. Kiddle Encyclopedia.